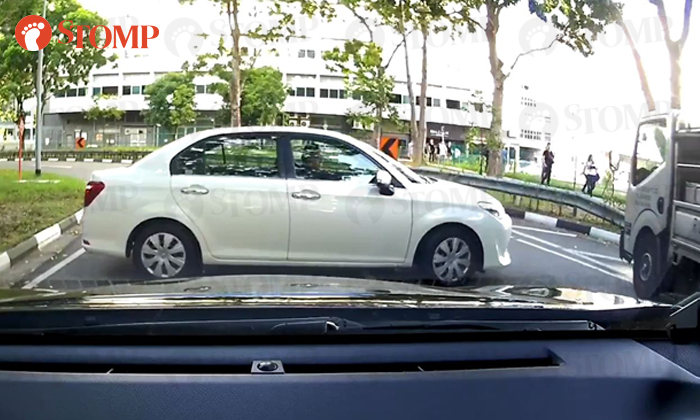 A driver was spotted reversing near a zebra crossing at Eunos before making a U-turn to drive against the flow of traffic.

On Dec 8 at around 8.45am, Stomper William came across a car in front of him that was reversing, only to make a U-turn on the one-way road.

The dashcam footage that he sent shows a white car reversing slowly while blocking a lorry that was behind the car.

The lorry then turned into the right lane to overtake the car.

Continuing to reverse, the car stopped just in front of the Stomper's car.

The car then attempted to make a U-turn by turning right but it was unsuccessful. Reversing back to let another lorry pass, he went for the U-turn again and drove in the opposite direction on the one-way street.

According to the Stomper, a pedestrian who was at the nearby zebra crossing told the driver off, telling him that it is a one-way street.

Describing the driver's behaviour, the Stomper said, "Typical private hire vehicle. They think they own the road."

He added, "I suspect he was trying to go to the StarHub building nearby but he missed the turn so that's why he U-turned even though it was a one-way street."

Related Stories
Toyota driver makes "ridiculous" U-turn along Bedok North St 1
Driver of Hyundai SKG1958M die die wants to make illegal U-turn
Honda driver, where in the world did you learn to make a U-turn like this?
More About:
going against traffic
Eunos
u-turn