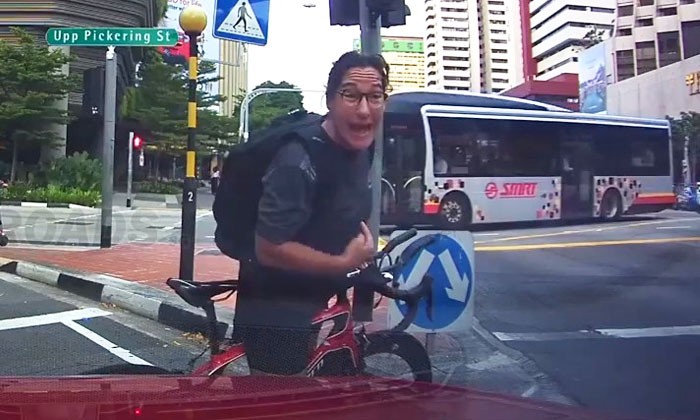 A female cyclist caused a driver to jam on the brakes after cutting in front of his or her car along New Bridge Road on Jul 20 at around 8am, before proceeding to berate the motorist.

Stomper Edwin alerted us to a video of the incident that was posted on ROADS.sg.

In the video, the driver can be first seen making a turn into Upper Pickering Road from New Bridge Road.

As the driver approached a zebra crossing, the cyclist cut in front of his or her car from the left. She did so a few metres away from the zebra crossing just before the stop line on the road.

According to the video's caption, the driver then jammed on the brakes to avoid an accident.

Thereafter, the woman stared staring angrily at the driver before berating him or her.

The latter elaborated about the incident in the video's caption:

"As I was on a lane that allowed me to turn left or go straight, and I had signalled my intention to turn left, I did not expect a cyclist to suddenly cut in front of me to go straight, especially so close to my car such that I could not possibly have seen her until she appeared in front of my car."

"She did not consider herself to have done anything wrong.

"The gentleman in green seen at the end of the video disagreed with the cyclist but she remained vehement that she was right to have done what she did.

"Perhaps she was right and I was at fault.

"Whatever the case may be, I hope the video can be a reminder to other cyclists and drivers to be careful.

"The video does not contain audio to preserve my family and my privacy, and not because expletives were used by her or me. "

Related Stories
Safety clearly means nothing to cyclist who almost got hit after beating red light
Reckless cyclist shows how not to ride, while role model does the opposite
Driver was this close to hitting cyclist after failing to stop at zebra crossing
More About:
dangerous
reckless
cyclist
driver
near-miss