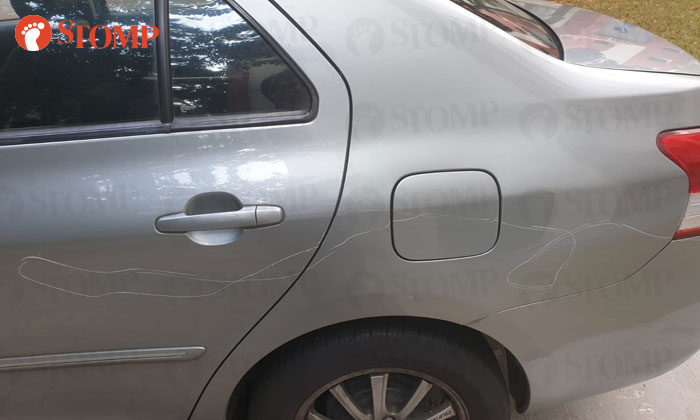 Yet another person has come forward with his account of how his car was scratched while parked along St Anne's Wood.

Stomper Shah had parked along St Anne's Wood on Aug 14 at about 12.30am. He told Stomp that his car was not blocking any property.

At 6.30am, when he went to give his wife a ride to work, she pointed out to him that there was a deep long scratch on the side of the car.

"When I went through the in-car camera's video footage, I realised that once the car engine was off, the recording had stopped too," he said.

"I reported the matter to my hirer as this was a rented car and he advised me to lodge a report.

"After a few weeks, my hirer shared an article from Stomp about a similar incident and to make my case stronger, I understand two more cases popped up at the same location after I joined the Stomp WhatsApp broadcast list.

"I believe this is a work of mischief done by a serial car scratcher who is sick and not well.

"I wanted to share my own experience so that the authorities can take some action on this sick person."

Stomp earlier reported on Stomper Janice finding scratches on her car after parking along St Anne's Wood in Sengkang on Aug 22.

After reviewing her in-car camera footage, she saw a man, whom she believes to be a resident in the area, exit his home and approach her car.

The grating sound of metal on metal is heard as the man walks out of the video frame and eventually back to his house.

After reading Stomp's report, Stompers Malvin and Rebecca informed Stomp that they had similar experiences after parking along the same stretch of road.