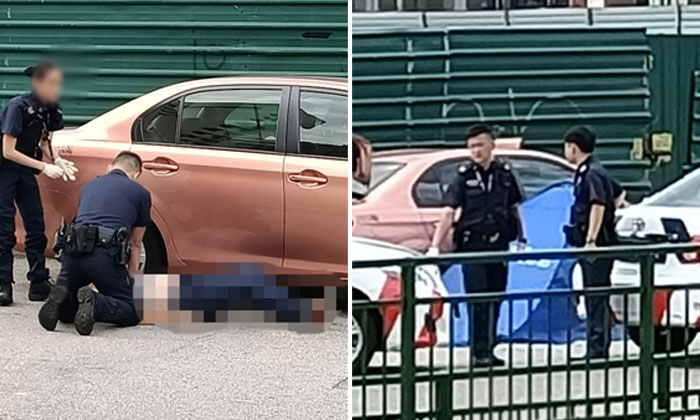 A cabby was pronounced dead after he was found motionless in his taxi along Kelantan Road on Sunday morning (Feb 16).

Stompers Rohaizat and Sarah alerted Stomp to photos circulating on social media of the incident.

In one of the photos, an officer is seen performing cardiopulmonary resuscitation (CPR) on the cabby who is lying on the road next to his taxi.

In another photo, a blue death tent is set up.

According to Shin Min Daily News, the police were alerted to the incident at 9.21am.

Reporters arrived at the scene at 11.30am and found police officers had cordoned off the area.

Four police cars had been dispatched to the scene.

The deceased is believed to be a 67-year-old man.

Shin Min reported the cabby was pulled out of the car by on-site medical staff after he was found motionless in the car.

No blood was found at the scene.

Related Stories
Man found dead at Punggol carpark after allegedly stabbing himself due to money problems
Half-naked man found dead at foot of Punggol block after being confined in room by another man
Workers dies after crashing through ceiling at Tampines Mall
More About:
death
cabby
taxi driver
taxi