Man arrested for suspected drink-driving after accident at Hougang junction 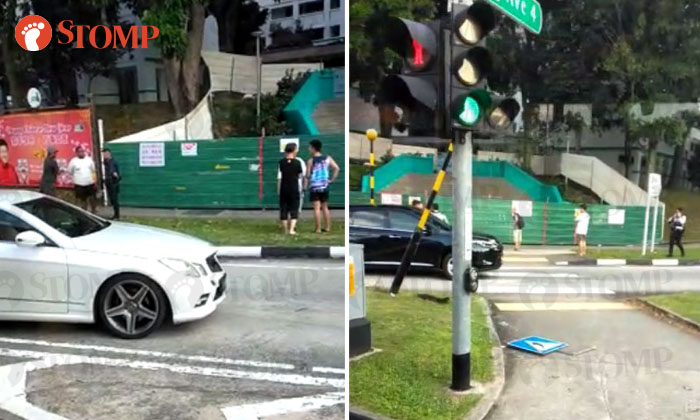 A man was arrested for suspected drink-driving following an accident involving two cars at the junction of Hougang Avenue 4 and Buangkok Green last Sunday (Jan 6).

Stomper Lee passed by the scene of the accident at around 5pm.

She said: "I was in my car heading out for dinner in Ang Mo Kio and saw the aftermath of the accident. There was a Toyota Harrier and Mercedes E250 there."

In response to a Stomp query, the police said: "On Jan 6 at about 3.50pm, the police were alerted to an accident involving two cars at the junction of Hougang Avenue 4 and Buangkok Green.

"There were no injuries reported.

"A 30-year-old man was arrested for suspected drink-driving and police investigations are ongoing."

She took pictures and videos to send to Stomp.

In the video, a man can be seen squatting and taking pictures of a black Toyota just before a zebra crossing at the junction.

A traffic sign pole is slanted and its signboard has fallen off its pole onto the ground.

A white Mercedes is stationary a few metres behind the Toyota.

As the Stomper's car continues travelling, a few other cars can be seen to have stopped ahead.

A group of police officers are also at the scene.