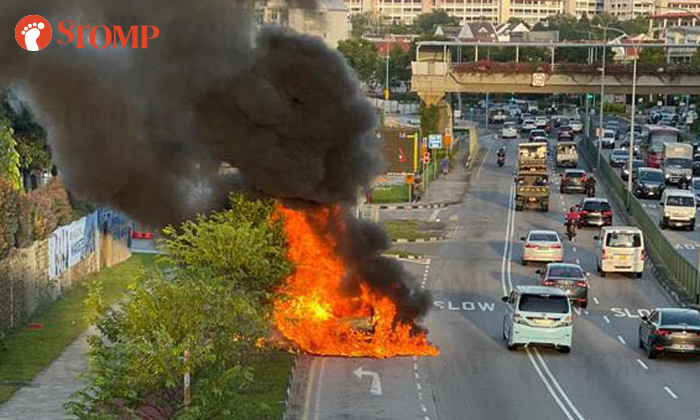 A black Mercedes-Benz burst into flames outside Maris Stella High School along Bartley Road at about 7.30am on Thursday (Jan 13), minutes after its driver and her son sensed that something was amiss and left the vehicle.

The driver, who wanted to be known only as Ms Quek, told The Straits Times that she was ferrying her son - a Primary 1 pupil - to the school when the incident happened.

"We were queueing (to get into the school) when we smelled something burning, and my son told me to evacuate quickly."

She was heard telling school staff that when they smelled something strange in the car, her son had told her: "Mummy, let's get out." 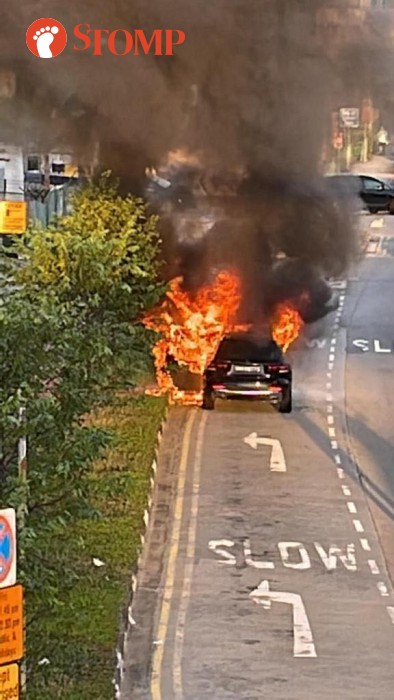 Ms Quek was heard seeking assistance from the school and told school staff that she had called 995. The car then burst into flames.

A security guard came out of the school with a fire extinguisher a few minutes later and attempted to put out the fire but to no avail.

A few explosions could be heard from the burning vehicle every few minutes. Black smoke was seen rising from it and drifting into the school.

Singapore Civil Defence Force (SCDF) officers put out the fire when they arrived at the scene shortly after.

A spokesman for the SCDF said it was alerted to the fire at about 7.30am. Firefighters extinguished the blaze using two compressed air foam backpacks and a hose reel.

ST understands that Maris Stella High School will be rendering support to a few of its students who witnessed the incident and are affected by it.

Related Stories
Porsche goes up in flames on AYE
Car catches fire after loud 'bang' along Tampines Avenue 1
Porsche on fire at Orchard Turn
More About:
fire
car on fire