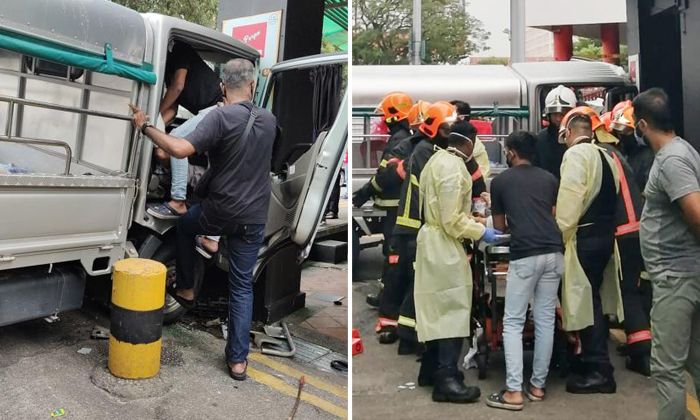 A lorry driver, 68, died after losing control of his lorry and crashing into a shophouse pillar at 33 Jalan Besar opposite Sim Lim Tower on Monday (Nov 8).

He was unconscious when taken to hospital by the Singapore Civil Defence Force (SCDF).

An employee at the nearby Haising Hotel said she heard a deafening bang as she was buying coffee on her way back to work.

Giving her name only as Ms Eva, the 46-year-old housekeeper said she turned around to see the lorry with its windscreen completely shattered, and the driver slumped in his seat, just 3m away from her.

When she recovered from the initial shock, she and several passersby and shopkeepers rushed forward to help the driver.

She said the driver was barely conscious.

The passersby forced the door open and tried to pull him out but his legs were trapped under the steering wheel as the front of the lorry was badly damaged.

Two young men then took turns to give the man cardiopulmonary resuscitation from the front passenger seat and outside the lorry.

"I kept trying to talk to him, asking, 'Uncle, uncle, are you okay? Can you hear me?'", Ms Eva said, adding that he did not respond.

The SCDF arrived and extricated the trapped driver using rescue equipment before taking him to Tan Tock Seng Hospital.

Administrative staff Sakthivel Durairajan, 31, was working in the back of a mobile phone shop near the crash site when he heard the sound of glass shattering.

He said he thought his fridge outside the shop had toppled.

He said the driver appeared not to be breathing or moving, and passersby were giving him CPR.

He added that the shopfront area where the lorry had crashed is usually crowded with patrons of a Muslim restaurant, but no one was there yesterday as it is closed on Mondays.