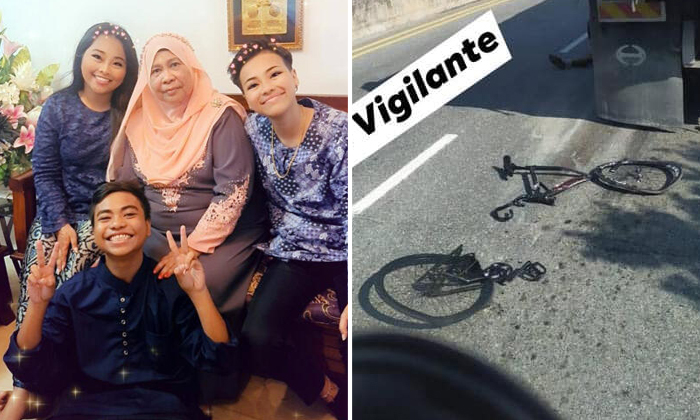 A cycling outing among friends at the start of the school holidays ended in tragedy when 14-year-old Muhammad Nur Shazly Mohd Ali died after his bicycle was involved in an accident with a truck on Monday in Marina East Drive.

Photos of the accident uploaded onto Facebook group SG Road Vigilante - SGRV on Wednesday showed the mangled bicycle broken into two pieces and lying in the middle of the road.

The police said the teenager was pronounced dead at the scene by a paramedic.

His two friends were not hurt.

A 37-year-old male driver has been arrested for careless driving causing death, the police added.

Speaking to Malay-language daily Berita Harian in an interview published yesterday, Nur Shazly's aunt, Ms Nor Salinah Shalihen, said her nephew, who was affectionately called "boy", was a generous person who loved to help others.

"He was a very good boy and listened well... We are devastated over his death," Ms Salinah told the paper.

According to Berita Harian, Nur Shazly had been planning the cycling outing with his friends before the mid-year holidays.

The teenager was the youngest of three children and was cared for by his grandmother, who lived with Ms Salinah in Bedok.

He wanted to be a police officer when he grew up, said Ms Salinah.

"His future was very bright but unfortunately, his life was cut short," she said.

She said people had visited the family to offer condolences, some of them strangers to the family. But they said they knew Nur Shazly and had only positive things to say about him.

One of visitors was the principal of Damai Secondary School, where Nur Shazly studied.

The principal, Ms Chan Wan Siong, told The New Paper that the school is deeply saddened by the teenager's sudden death.

She added: "He will be dearly missed by his teachers and friends.

"Our thoughts are with Shazly's family in this difficult time, and the school will support them as best as we can."

Ms Chan also said that Nur Shazly's form teacher, year head and senior school counsellor are in touch with his close friends and have counselled them individually.

"They will be reaching out to the rest of Shazly's classmates as well. The school will continue to monitor the well-being of Shazly's schoolmates during this period," she added.

A family friend, Ms Anith Athirah Rahwom, 36, told Berita Harian that Nur Shazly was someone who got along with everyone.

She said: "He was loved by many. Our sad feelings cannot be expressed in words.

"We hope others take this as a lesson. We all have to be careful when cycling or driving, or doing anything on the road."

Cycling on the roads has featured heavily in public discussions recently after calls to tighten the rules.

In April, Senior Minister of State for Transport Chee Hong Tat announced that an advisory panel will conduct a review of existing regulations governing bicycles on the roads to improve the safety of both cyclists and motorists.

The review, which will take in feedback from the public, will also study whether cyclists should be licensed and take theory tests.