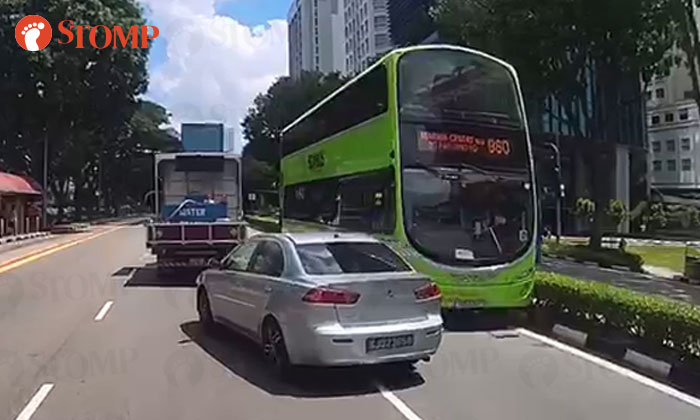 The SMRT bus captain who turned into the wrong lane from Ophir Road onto Victoria Street on Saturday (Feb 23) has been suspended.

In response to a Stomp media query, Ms Margaret Teo, Vice President for SMRT Corporate Communications, issued the following statement regarding the incident:

"On 23 February (Saturday) at around 12.15pm, our bus captain of service 960 turned into the wrong lane on Victoria Street from Ophir Road, while heading towards Marina Centre Terminal.

"SMRT takes a serious view of the safety of our commuters.

"The bus captain has been suspended and we are investigating the matter.

"We apologise to all affected commuters and road users who were inconvenienced that afternoon."

A double-decker public bus was seen going against traffic along Victoria Street on Saturday afternoon (Feb 23).

Stomper Mangku was driving towards Kallang Road at about 12.12pm when he saw bus service 960 coming from the opposite direction.

He shared footage from his car's dashboard camera with Stomp.

In the video, traffic in the right-most lane comes to a standstill as the bus approaches before motorists start making way for it.

It is unclear how or why the bus driver ended up on the wrong side of the road.