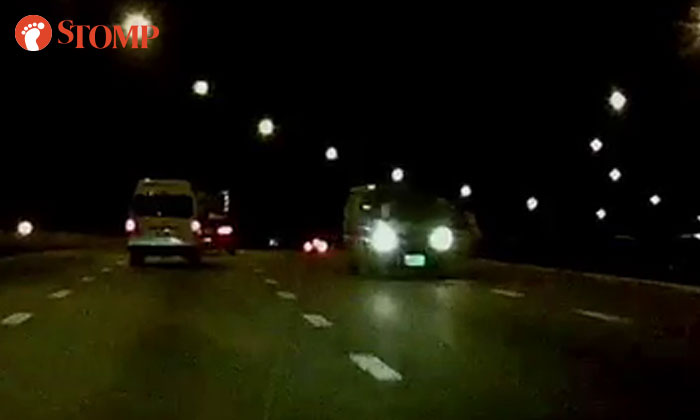 A van driver was caught on video going against traffic along the Pan Island Expressway (PIE) on Christmas Day (Dec 25).

Stomper JD alerted Stomp to the incident after encountering the driver while driving on the PIE towards Changi Airport near Bukit Timah at about 2am on Tuesday.

"A van was travelling in the opposite direction from the traffic flow on PIE endangering multiple vehicles and causing me to perform an emergency slowdown and changing of lane to avoid him," the Stomper said.

Another video showing the van going against traffic was posted on ROADS.sg's Facebook page with a caption indicating that it happened before the BKE exit.

In the video, another driver in front of Dale is seen applying his brakes after sighting the van coming from the opposite direction.

The contributor, Dale Cheong, wrote: "[The] van was driving head-on at a fast rate of speed towards me.

"I am thankful that I was not killed by this reckless act."

Related Stories
Yet another Instagrammer posts video of cars racing
Bus driver and motorist engage in road rage dispute -- while man holding torchlight watches
Does this driver even care that he's going against traffic on one-way road in Hougang?
More About:
dangerous driving
drivers going against traffic