Does life mean anything to this cyclist circling around traffic at Upper Pickering Road? 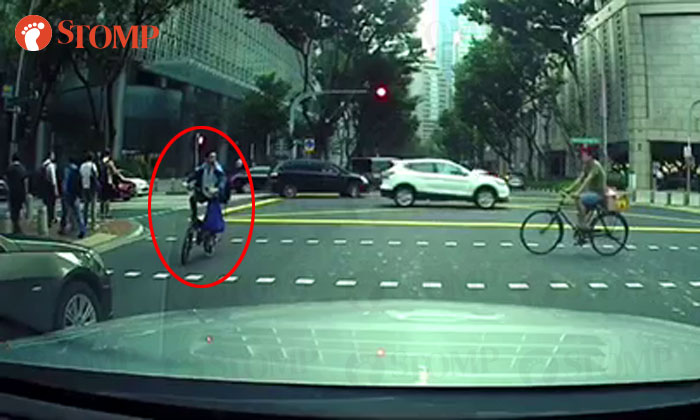 Stomper Connie saw a cyclist unexplainably riding in circles at a traffic junction along Upper Pickering Street on Jan 16.

The cyclist's bizarre behaviour was caught on Connie's dashboard camera.

"I stopped my car at a cross junction while waiting for the traffic light to turn green," he said. "While waiting, a cyclist travelling in the same direction as me dashed past the stop line and turned right to continue cycling at the pedestrian lane."

The cyclist then proceeded to ride in circles at the crossing before recklessly merging with traffic coming from the left.

"He spotted his chance and made a turn and cut across four lanes of morning peak-hour traffic!

"He was lucky that he managed to cycle across a busy road without causing any traffic accident.

"His dangerous act may have caused an accident involving him or other road users."

This is not the first time a cyclist has been seen performing this antic.

Last August, a boy on a bicycle was spotted riding in circles on Prinsep Street.

Can anyone explain their actions?

Related Stories
Wah, we don't know what to say about this boy...
First, there were e-scooters...now there are people cycling in tunnels
Female cyclist flashes middle finger at driver who honked at her for riding in middle of road
More About:
bicycle
dangerous
weird
cyclist