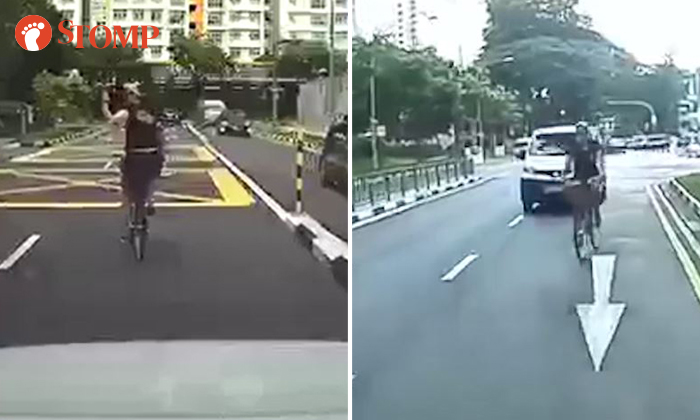 A female cyclist was caught on camera pointing her middle finger at a driver who had honked at her for riding at the centre of the road.

Stomper Alan was driving along Kim Tian Road towards Tiong Bahru at around 8.21am when he saw a woman cycling at the centre of the road.

Dashcam footage shows the Stomper approaching female cyclist riding close to the middle of the road as she was trying to avoid the truck. He then honked at her.

She then swung around to point her middle finger at the Stomper when he briefly honked at her again.

He told Stomp, "I used a normal horn to signal her to move out of the way. It wasn't a long (press of the) horn."

"She is at fault and still wanted to point her middle finger at me."

According to the Stomper, the cyclist had continued cycling in the middle of the road after he passed her. This was also captured in the video as she continued to cycle at the centre of the road in front of a white van before swerving away.

"She initially moved to the left side then after that she resumed cycling in the middle of the road again. She nearly caused an accident with the van driver behind her as she cycled from left to right on the road," added Alan.

Cyclists cycling in the middle of the road is a common sight, according to the Stomper.

"It happens so often. I think it's getting from bad to worse."

"I think the (behaviour) of this kind of cyclist is unacceptable. Hope authorities will do something about this," concluded the Stomper.