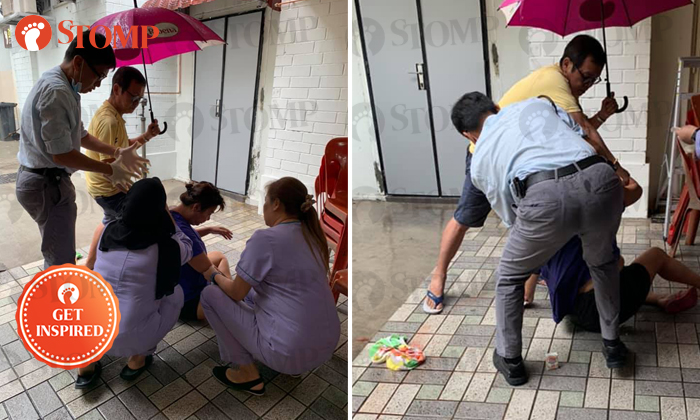 Stomper D was passing by a coffee shop at Block 417 Yishun Avenue 11 during his lunch break on Monday (June 3) when he noticed a commotion and went to take a look.

What he saw was an elderly woman bleeding and lying on the ground, surrounded by people.

The woman is believed to have fallen down due to the slippery floor caused by wet weather.

D told Stomp: "There were a lot of people standing there to watch while some called the ambulance.

"I noticed that just beside the coffee shop was a clinic named Healthway Medical. Without further delay, I went in and asked for their doctor."

Even though it was lunch time, a doctor and two nurses ran out of the clinic to help the injured woman "without a second's hesitation," said the Stomper.

D added: "Blood was flowing out from the woman's head.

"Dr Lai attended to the auntie and offered to carry her to his clinic, but was told that the ambulance was already on its way.

"He then helped the auntie to sit up and instructed his nurses to get bandages to stop the bleeding. They also used gauze to clean her wound."

Photos taken by the Stomper show a passer-by using an umbrella to shelter the injured woman from the rain while the doctor and nurses attended to her.

A bloodied cloth can also be spotted on the ground.

In response to a Stomp query, a spokesman for Healthway Medical Group said: "We are heartened to hear of the quick response and level of care displayed by Dr Lai, Ms Nur and Ms Lee.

"Building a strong foundation of dedicated healthcare professionals is at the core of Healthway Medical, and we are proud to see our staff going beyond the call of duty.

"We would like to wish the patient a speedy recovery."

Commending the doctor and nurses for their swift action, Stomper D said: "What a calm and steady doctor with two attentive nurses. They are so kind and professional.

"They helped out even though the ambulance was on its way. Even the rain did not stop them.

"All praise to the team of Healthway Medical, you have my respect!"

The Singapore Civil Defence Force told Stomp that it received a call for medical assistance at around 1pm. The woman was conveyed to Khoo Teck Puat Hospital in an ambulance.