'Thank you, amazing Singaporeans!': Father and son help elderly commuter who got injured on bus 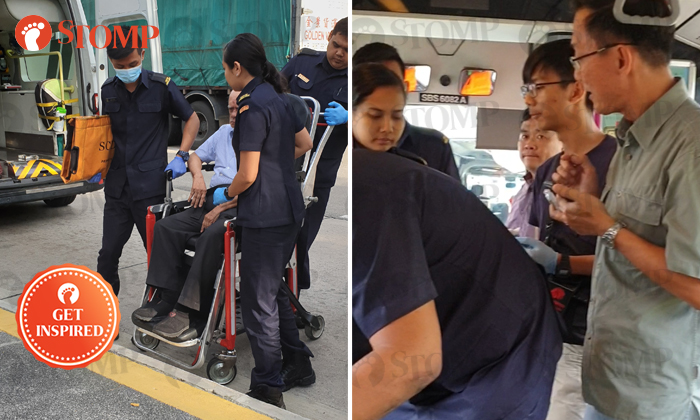 Stomper Vincent's 84-year-old father was injured while on board a bus, but two kind-hearted commuters wasted no time in rushing to his aid and providing assistance.

Vincent is immensely grateful to the two commuters, whom he identified as father and son, and hopes to highlight their actions on Stomp.

The incident occurred at a bus stop opposite Bedok 85 Market on Friday (May 17), at around 5.30pm.

Vincent's parents and his domestic helper were on board bus service 222 along Bedok North Road when the bus suddenly braked in order to avoid a vehicle that had swerved into its lane.

Vincent, who learnt of the incident afterwards, said: "The impact caused everyone to be flung forward, though only my dad was hurt.

"My dad was seated at that time but his face hit the bus pole.

"I'm not faulting the bus as I heard it was trying to avoid a car that was in the bus lane.

"While other commuters alighted, two gentlemen, Steven and his son Dillon, stayed on to help.

"Dillon is from St John Singapore and provided first-aid for my dad, who had cuts in a few places."

Vincent, who lives in the vicinity, rushed to the scene after receiving a call from his domestic helper.

He said: "Steven and Dillon (pictured below) also volunteered as witnesses and stayed with my dad until I arrived." 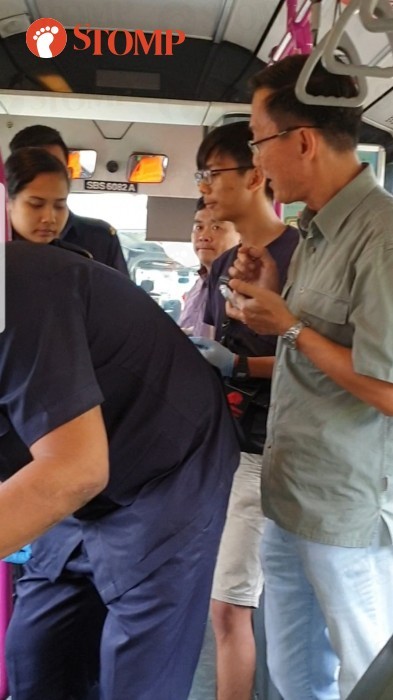 The Singapore Civil Defence Force (SCDF) confirmed that it received a call for medical assistance. Vincent's father was taken to Changi General Hospital for treatment.

In response to a Stomp query, Ms Tammy Tan, SBS Transit's senior vice-president of corporate communications, said: "Our bus captain had to apply emergency brakes to avoid a collision when a vehicle suddenly swerved into his lane.

"As a result, a passenger was injured and our bus captain immediately contacted the operations control centre, which activated an ambulance.

"The injured passenger was conveyed to the hospital where he received outpatient treatment.

"We are in touch with his son to render assistance as best we can."

According to Vincent, SBS Transit also sent his family a flower basket.

The Stomper added: "We often talk about how ugly Singaporeans can be. I hope sharing this will allow me to change that.

"The two gentlemen who helped my dad are amazing Singaporeans.

"Thank you for being there, for caring and making the world a better place."