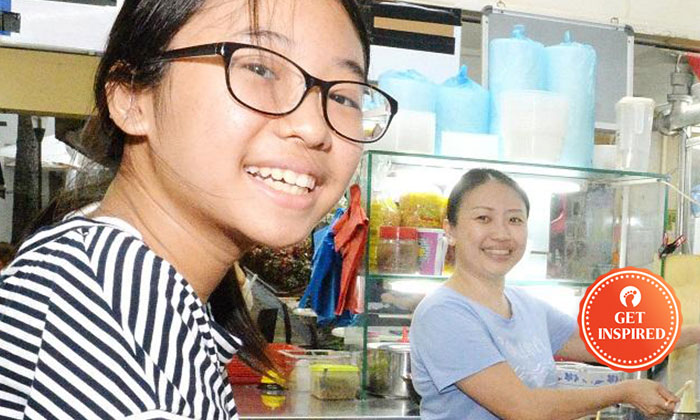 A Malaysian woman married a Singaporean man and moved to Singapore, but was devastated after their divorce that she nearly took her own life.

Fortunately, under her daughter’s advice, Ms Liang Baoyi diverted her energies towards setting up a ban mian stall, which has since become a customers’ favourite, even attracting tourists.

The woman’s husband had been in an affair since five years ago and asked for a divorce a year into his extramarital relationship.

Ms Liang had no relatives in Singapore and was once in so much pain over her failed marriage, that she contemplated suicide.

She said that she was standing on a chair thinking whether to jump down from her flat.

Her daughter, sobbing as she pleaded, managed to sway her decision, saving her from the point of no return.

Under the encouragement from her daughter, who had nothing but praises for her ban mian, the downtrodden Ms Liang managed to pick herself up.

In Oct 2015, she set up a ban mian stall in a coffee shop at Block 31, Holland Close, reports Shin Min Daily News.

When reporters recently visited the stall, they found that business at the stall was brisk.

“The business has been good, probably the best since the stall was opened.

“I remember on the first year, I would just sell about 20 bowls of ban mian a day.

“Before that, I was using around 7kg of flour to make the noodles, but now, I’m using about 10 to 12kg every day.”

She revealed that her relatives in Malaysia have also reached out to her to show their support, and many customers were touched by her story, withstanding the long queues just to have a taste of her ban mian.

“My story has even spread to Australia, Canada, America, and Singaporeans abroad have said on their Facebook page that they will come and support my stall.

“Some Malaysian tour groups also visit my stall quite often.”

Ms Liang revealed that she was now reinvigorated, and hopes that with her newfound determination, she will be able to bring her ban mian to greater heights.

Her goal is to buy a flat so that her daughter can have a safe home to grow up in.

The two currently rent a flat, but the lease is soon expiring and they will have to move elsewhere.

“I am not a Singaporean, but my daughter is.

“I have asked my MP for help. and hope that they will allow me to buy a local estate, to allow my daughter to grow up in a safe and stable environment.”