Diners shocked by $0.50 fee for cutlery set at BBQ restaurant, want to complain to CASE 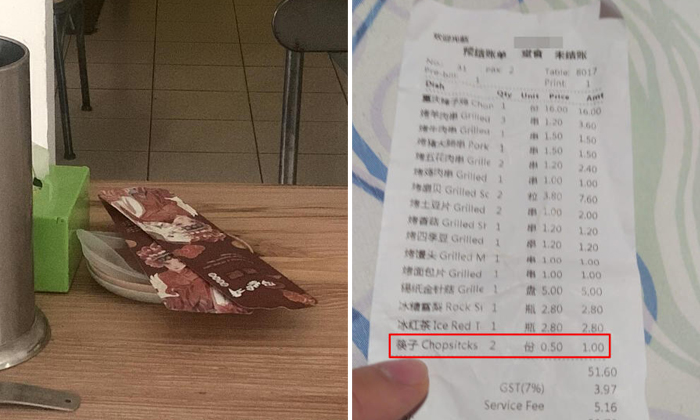 Diners were left puzzled after being charged $0.50 each for their cutlery at a BBQ restaurant along Prinsep Street.

Ms Chen told Shin Min Daily News that her 26-year-old daughter had visited the restaurant with a colleague after work on the evening of November 6.

Upon making payment, the pair noticed a separate charge on their bill for cutlery. Each diner was charged $0.50.

This left the two of them shocked, but they made payment without asking further as they had already finished their meal.

Ms Chen said: "When my daughter came home and told us about it, we all felt very confused as we dine out often and there is no extra charge for cutlery."

She also pointed out that it was not about the money but felt that such charges were "outrageous", as cutlery is usually free when you get takeaway food.

"The cutlery set consists of a pair of chopsticks, a spoon, one wet tissue and a toothpick. Customers cannot return the items individually and it's a mandatory charge. I am considering complaining to the Consumers Association of Singapore (CASE)," Ms Chen added.

He said: "The restaurant moved here in August and we improved our quality as the business expanded."

Mr Li also said that the restaurant started providing customers with the cutlery set in September and no one has complained so far.

Those who ask about the extra charge are all able to accept it after an explanation from restaurant staff, he added. Those who get their chopsticks dirty or drop them on the floor are also able to get a free replacement.

Other restaurants that Shin Min interviewed felt that the BBQ restaurant should inform customers about the charge in advance.

However, a regular patron who last visited the restaurant on Monday (Nov 15) told Stomp: "I didn't know about the charge on my first visit in September, until I was making payment.

"Even though I was surprised as I have not come across this at other places, I thought the cost was reasonable and have continued to visit the restaurant.

"The cutlery set is packed nicely and looks very sanitary compared to the usual disposable chopsticks, so I find the fuss over $0.50 a little ridiculous."

Related Stories
Would you pay $8.10 for this meal at coffee shop? Man finds it 'ridiculous' and 'desperate'
Diner says $15.40 mala hotpot from Sengkang food court is 'too expensive and unreasonable'
Woman disappointed after 'driving all the way' from AMK for $5 chicken rice at Maxwell Food Centre
More About:
expensive
expensive food
food
restaurant