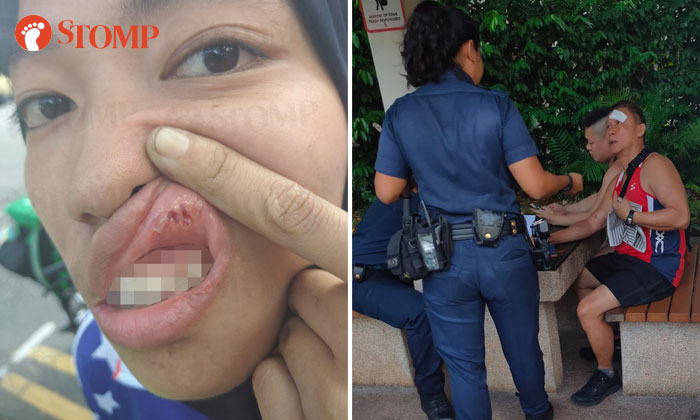 Two food delivery riders who were involved in a case of affray with an elderly man at Tiong Bahru Park have come forward with their side of the story.

Stomper Roy, a witness, had alerted Stomp to the incident on Monday (Mar 30) and shared that the elderly man was allegedly assaulted by the riders after asking them not to smoke in the park on account of elderly people exercising nearby.

He told Stomp the 67-year-old was "kicked and punched" by the female GrabFood delivery rider and a Foodpanda delivery man.

He also shared with Stomp photos of the man with a cut on his left eyebrow and a bandage around his right knee.

In response to a Stomp query, the police said they were alerted to a case of affray involving two men and a woman, aged between 24 and 67, at 1 Henderson Road at 6.19am.

After the article was published on Monday, the delivery riders involved contacted Stomp with their own account of what happened.

The Foodpanda delivery man told Stomp: "Yes, there was a group of elderly people exercising near where I was smoking a cigarette at a shelter in the park.

"Every night after making late-night deliveries, my colleague and I take a rest at that shelter and we always see these elderly women exercising there.

"I smoke but they have never made any noise about it.

"However, that day, one of the women made a lot of noise due to the smoke so some members of the public stopped to understand what was going on.

"It was only smoke and I was already getting ready to pack up and move off but this uncle stood there staring at me in a 'ya ya' way.

"I told him to please move on and that there was nothing to see but he kept staring at me so I raised my voice.

"He started pointing his finger at me and asking me to come out from the shelter while taking out his phone to call the police.

"From what I saw, he was asking for a fight.

"He then spoke loudly into his phone: 'Hello police, I want to report a man smoking in the park and I asked him not to and now he wants to pick a fight with me...'

"I just ignored him and told my colleague to pack up and go.

"After we left the tent, I saw the uncle speaking to a cleaner at another shelter.

"I cycled past him and nothing happened but when my colleague went past him, she told me he grabbed a long broom stick and acted like he wanted to hit her.

"She jumped down from her bike and asked him in Malay, 'Apa pasal lu mau pukul gua?' (Why do you want to hit me?)

"From there, the argument started and the cleaner became caught in the middle trying to stop them from fighting.

"Upon hearing the argument, I cycled back to them and my colleague turned her head to see me coming.

"That was when the uncle took a cheap shot and hit her on the left side of her face, hitting her upper lip. 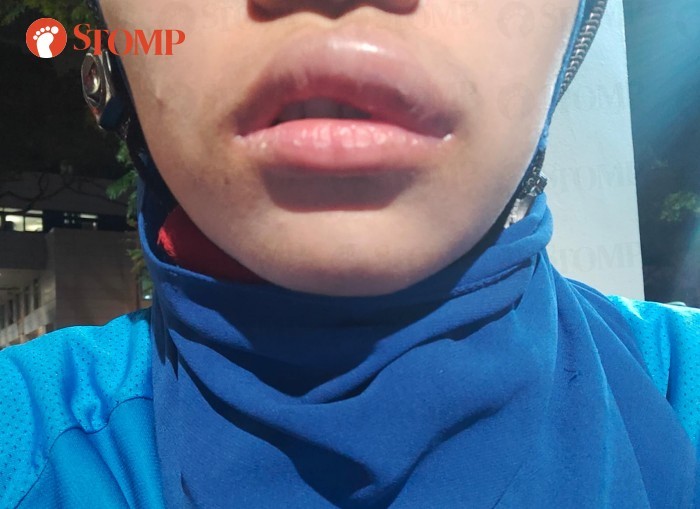 "After he hit her, I straight away punched the left side of his face to defend my colleague and to prevent him from hitting her again.

"He fell and got up and started throwing punches at me but missed.

"I returned the punch and hit him at the same spot.

"He fell again, this time with blood all over his face.

"He got up slowly and the cleaner stopped me from fighting further.

"Other members of the public stopped the other man too.

"I asked my colleague to leave the scene and go to the other side of the park to clean her wound.

"After a while, we both returned to the scene and saw the uncle and his friend talking to police officers.

"We took advice from the police to go to Clementi Neighbourhood Police Centre to lodge a report."

Related Stories
Case of criminal force in Pasir Ris: 'We trying fight Covid-19, y'all trying to fight one other'
Trays and chair thrown, dishes smashed: Uncle and auntie injured in fight with stall owner
More About:
affray
fight
dispute