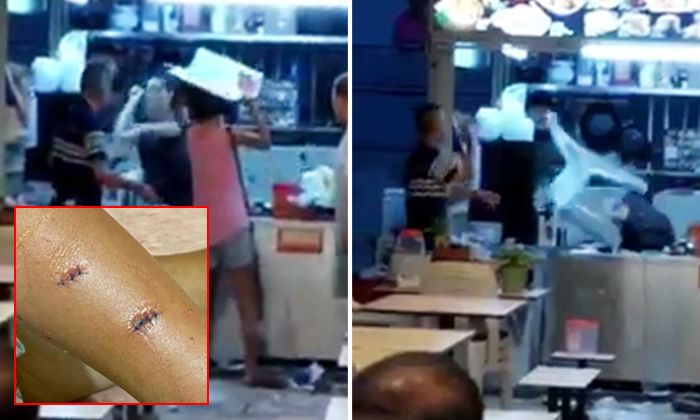 Two people were taken to hospital after a fight involving an ex-couple and a food stall owner broke out at Jalan Kukoh Food Centre on Sunday evening (Mar 15).

In response to a Stomp query, the police said they were alerted to a case of voluntarily causing hurt and mischief at 1 Jalan Kukoh at 7.29pm.

"A 57-year-old man and a 52-year-old woman were conveyed conscious to Singapore General Hospital," said a police spokesman.

They reportedly received stitches for the cuts on their hands, arms and thighs. The woman's forehead was also injured.

A video posted on Facebook, which Stomper Wilson alerted Stomp to, shows a man and a woman fighting with the owner of a bak kut teh stall.

Both parties can be seen smashing and throwing various items such as dishes, trays and cutlery at each other.

The uncle is also seen flinging a plastic chair at the stall owner.

The auntie, Mdm Chen Xizhi, told Lianhe Wanbao that the uncle is her ex-husband. Both are unemployed.

She said: "I saw that he was arguing with the bak kut teh stall owner. I quickly went up to find out what happened."

Mdm Chen claimed that before she even had a chance to speak, the stall owner picked up a pot and hit her on forehead with it.

She added: "Seeing that I was being hit, my ex-husband used both hands to shield me, but the stall owner threw cutlery, trays and bowls at me."

A fight subsequently broke out.

Mdm Chen said she does not rule out pursuing legal action to get justice.

When Wanbao reporters visited the coffee shop, the stall owner involved in the altercation said she had a clear conscience.

The woman, who declined to be named but is in her 40s, said she was angry with the uncle for verbally abusing her.

She added: "I don't wish to say more. Since it has already happened, let the police handle it."