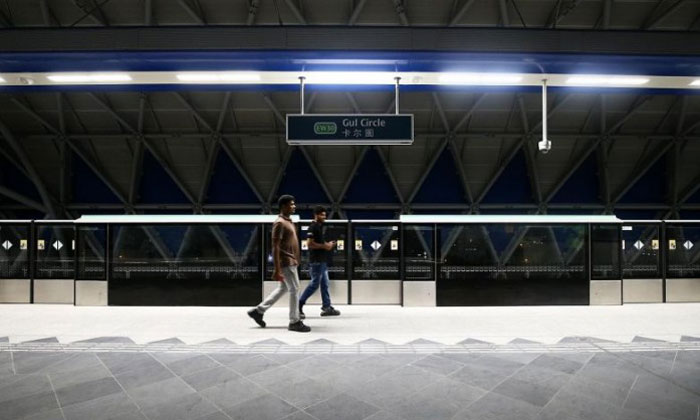 Train services between Gul Circle and Boon Lay stations on the East-West Line were delayed in both directions early on Wednesday morning (Dec 12) after an SMRT employee was injured in an accident while carrying out maintenance work.

In an update posted on their Facebook page at 7.28am, SMRT said the staff member suffered foot injuries while carrying out maintenance work near Joo Koon MRT Station at about 4.10am.

The Singapore Civil Defence Force (SCDF) was activated and took him to hospital.

In response to media queries, an SCDF spokesman said it responded to the incident at 4.20am.

The employee was conscious when taken to the National University Hospital in an ambulance.

The Straits Times understands that the employee is a man in his 50s.

"As this process required some time, the start of train service between Gul Circle and Boon Lay MRT station (both bounds) had to be delayed," the statement said.

"After our staff was conveyed to hospital, our engineering and operations teams conducted further checks on the track before service between Gul Circle and Boon Lay MRT stations was able to start at 6.20am.

"Our staff is currently in stable condition and undergoing treatment at the hospital.

"Workplace safety is a priority for us, and we will be carrying a full investigation into the accident.

SMRT first announced the delay in a tweet posted at 4.59am.

At 5.15am, it said that the accident occurred during track maintenance and that free regular and bridging bus services were available.

At 6.22am, it announced that train services on the East-West Line and resumed and at 6.49am, the free bus services had ended.

[EWL] CLEARED: Train services on the EWL have resumed. Trains are progressively returning back to normal speed. We apologize for any inconvenience caused.

"We are sorry to commuters whose morning commute was affected due to this incident," SMRT said in its statement.