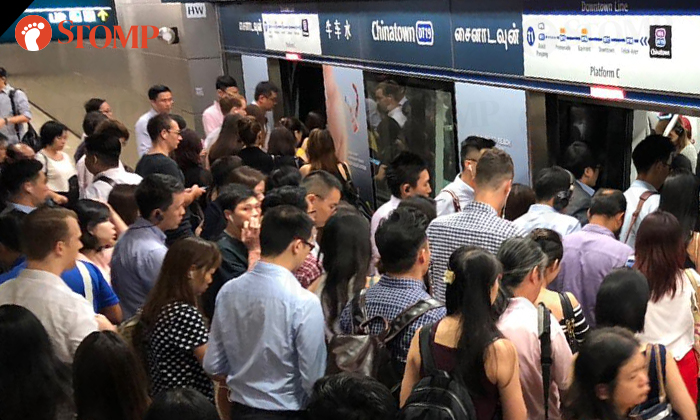 A defective train is behind this morning's (Dec 21) delays on the Downtown Line, says SBS Transit.

SBS Transit, which operates the Downtown Line, first tweeted about the delay at 7.50am where it informed commuters to expect 10 minutes of additional travelling time between Downtown station towards Expo due to a train fault.

DTL svc from Downtown towards Expo is delayed to a train fault. Add 10mins to travel time. We are v sorry.

However, the delay actually had actually occurred earlier.

In response to media queries, Ms Tammy Tan told Stomp, "Downtown Line train service from Bukit Panjang towards Expo was affected for about 40 minutes due to a train fault at Downtown Station."

"As the defective train was being pushed out of the Line, train service was disrupted from Bugis to Bendemeer Stations and service resumed progressively from about 7.34am," said Tammy.

It added that free bus rides were available to enable commuters to continue with their journeys at the affected stations.

Full service was restored at 7.57am.

However, Stomper Mary told Stomp that there were still large crowds at Kaki Bukit station when she arrived at 8.05am. She only managed to board a train at the station at around 8.30am.

SBS Transit adds that it apologises to commuters for the inconvenience caused and says it is investigating the cause of the train fault.