Stompers hit by third train disruption today: Latest one at about 6pm on NSL 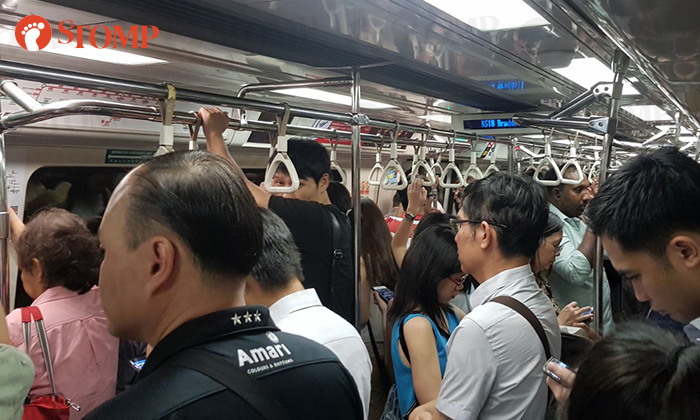 The North-South Line was hit by disruptions on Wednesday evening, which comes as the third disruption following an incident at Joo Koon MRT Station and another fault on the Circle Line.

A Stomper who boarded the train at Newton MRT Station at 6.10pm told Stomp in a phone interview that the train spent a longer period at the platform of each station before moving off.

“There was an announcement made, asking commuters to add about 25 minutes to their travel time.

“It’s five minutes or more at every station, and I’m going to Woodlands.

“ NSL] UPDATE: Pls add 25 mins train travel time when commuting on the NSL. Free bridging bus services from #Bishan to #Yishun (one way) and free regular bus services btwn #Bishan and #Yishun (both directions) are available.

A signal fault on the Circle Line held up train service in both directions for more than two hours on Wednesday morning (Nov 15).

Stomper Kristy was switching between the North-East Line to the Circle Line at Serangoon MRT Station today at 7.30am.

According to Kristy, the train heading in the direction of Harbourfront station was extremely crowded, and SMRT personnel prevented passengers from taking the escalator down to the platform for about three to five minutes.

The delay caused her to miss a train.

Although she managed to board the next train, the train continued moving at a slow pace, with the doors being opened for more than two minutes at each subsequent station.
When they reached Caldecott station, the passengers on the train were told to alight.

“The trains that arrived at the station after mine were all packed.

“Passengers from the second train after mine were told to alight as well.”

At 8.40am, an announcement was made, saying that train service had resumed, but trains and stations remained crowded.

“I only managed to get on the sixth train.

“Even then, the train that reached Caldecott at 8.42am was full and the doors remained open until 8.49am.

“Why won’t they just let the trains continue their journey to Buona Vista?

“The delays were supposedly between Buona Visa and Harbourfront.”

Kristy added that although they were told by the staff that there was a free bus service travelling to Toa Payoh, it was not helpful to most of the commuters there.

In a tweet by train operator SMRT at 6.28am, it warned commuters that the trains are moving at a slower pace between Buona Vista and HarbourFront stations.

It also said that it was investigating the fault.

[CCL]: Due to a Signal fault between #Farrer Road and # Buona Vista .Pls add 20mins train travel time between #Buona Vista and HarbourFornt on both bounds.

Another tweet by SMRT at 6.40am confirmed that there was a signal fault between Farrer Road and Buona Vista, advising commuters to add 20 minutes to their travel time if they were along the affected stretch.

At around 8.35am, SMRT announced in another tweet that the fault had been cleared, but the stations remained crowded.

Many passengers posted about the crowded conditions of the train on social media, reports The Straits Times.

“So much for mass transport.

“I stand until my legs going to pass away.”

The scene at Macpherson mrt this morning after a train fault on the circle line. #smrt pic.twitter.com/UtwGE4mJIG

so much for mass rapid transport :( i stand until my legs gunna pass away @SMRT_Singapore pic.twitter.com/nKky9exu7u

In a separate incident on the same day, a train came into contact with another stationary train at Joo Koon MRT Station.