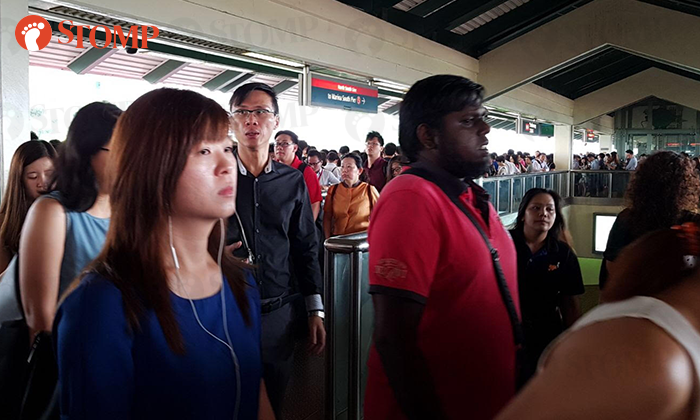 Commuters travelling on the North-South Line were affected by delays caused by a train fault on Thursday morning (Nov 9), during the peak hour.

The Straits Times reports that an in-train announcement about a train fault was made at City Hall station.

A Stomp journalist was also caught up in the delay when he boarded the train at Ang Mo Kio MRT Station at around 9.30am.

“The train moved very slowly as it was pulling over from Ang Mo Kio Station to Bishan station.

“It also stopped for a while, maybe 2 to 3 minutes before arriving at Bishan.

A Stomper told Stomp that he boarded the train at Woodlands MRT Station at 7.10am, and the journey to Newton MRT Station took an extra 30 minutes.

“Normal travelling time is usually between 30 to 40 minutes.

The Stomper said that the train stopped for around 5 to 6 minutes just as it was arriving at Bishan MRT Station from the Ang Mo Kio station before resuming movement.

Even then, it moved at a very slow pace and took more than 20 minutes to reach Newton MRT Station.

According to the Stomper, there was a series of announcements made at Bishan MRT Station.

Manager Neal Ang, 38, told The Straits Times that he was at Yishun MRT Station at around 8.40am and saw that the platforms were crowded.

“Some gantries were closed and the escalators were stopped to manage the crowd.”

Netizens' complaints about the delay started as early as 7.30am with photos of crowded platforms at Admiralty, Ang Mo Kio, Woodlands and Yishun posted on Twitter.

Ang Mo Kio station at 8.20am... #smrt @SMRT_Singapore I take the train every day this is not normal... wtf is going on!? At least have the courtesy to alert us pic.twitter.com/ptbmpmiAN4

Netizen xlcliangx tweeted at 8.01am:

"Plan for alternative transport if possible."

Operator SMRT has not made an official statement about the delay on its social media pages as of 11.50am.