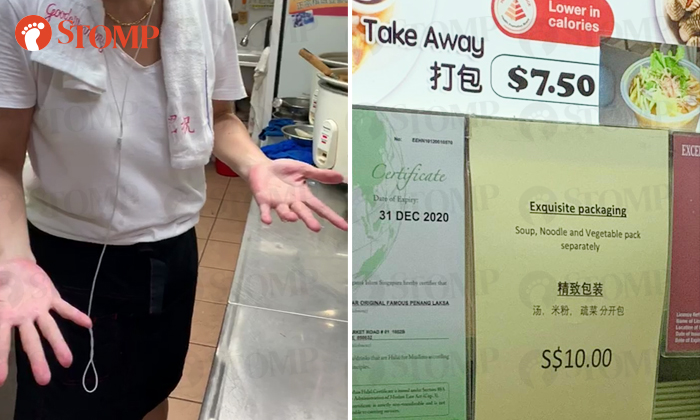 Stomper Jade was shocked when she wanted to order a takeaway meal at a hawker centre in Chinatown and was told that it would cost $10 if she wanted to pack the food items separately.

The incident occurred at a laksa stall at People's Park Food Centre on April 18.

According to a notice pasted on the stall, "exquisite packaging" to pack the gravy, noodles and vegetables separately would cost $10 instead of the usual $7.50.

Jade recounted: "I wanted to pay $7.50 for a takeaway order as stated on the signboard and requested that the noodles be placed separately in another small plastic bag.

"I am a consumer who is craving for food in Singapore. Unfortunately, we are unable to eat in due to Covid-19 circuit breaker measures.

"All I wanted was to separate the noodles from the soup. Is that an unreasonable request after paying $7.50 for a meal at a hawker centre?

Jade also shared a video that shows her speaking to the stall owner.

Jade: Walau eh, $10 for your takeaway is very expensive.

Owner: Very expensive hor, but it's ok if you don't want. We don't sell to you.

Owner: It's not very bad.

Jade: You still put on Facebook and ask us come here, then like that. I asked to separate because I bought two boxes for myself to eat.

Jade: I am not picking on you.

Owner: You said it's expensive.

Owner: My hands? Yes, I washed them.

Jade: I know your business is very good. But your attitude has to be better.

Owner: I never... Don't say me like this. Nobody talks to me like that, but you want to talk like that.... Nobody finds it expensive ok.

Jade: I'm not saying it's expensive. I'm just telling you to put the vegetables on top.

Jade told Stomp: "In the video, I said it was not expensive, which I regret.

"I have bought takeaways many times and the most they cost is an extra $0.50. The normal price for hawker centre stalls everywhere is only $0.30.

"This stall is too overpriced and extremely expensive for a hawker centre.

"Even though the deal did not go through, I tell myself that after having encountered this issue, I won’t return to this laksa stall for expensive takeaways and bad service anymore."

When interviewed by Shin Min Daily News, the stall owner explained that the two types of packaging are for different customer groups.

Ms Pan, 52, said: "The $7.50 laksa is for customers who are buying takeaways back to their office. Everything is placed together in one container.

"The $10 packaging is for those who want to eat the laksa later or the following day."

Ms Pan also said that the $10 version is of a bigger serving. Whether it is the noodles, soup or vegetables, they are all in bigger portions.

However, at least two other members of the public who were interviewed by Shin Min agreed that the difference of $2.50 is indeed too much.

One said that she would not buy the $10 version even if the portions were bigger, while another felt that Jade's request to separate the noodles and soup was reasonable and did not warrant the extra charge.

In response, Ms Pan said she has maintained the same principle ever since opening the stall, which is that the food has to packed separately if they are not going to be consumed immediately or it would affect the laksa's taste.

She also pointed out that her stall has listed both prices clearly.

The Stomper, however, said that none of these was explained to her when she was at the stall, including how the $10 version was bigger.

Jade added: "All I did was reject the $10 cost and the stall owner felt unhappy and did not want to do my business. She could have explained things nicely.

"I was so upset in that moment because I had gone all the way there from Sembawang after hearing about it on Facebook, not knowing about all these.

"I've never encountered such behaviour from a hawker. I was so far away from home but ended up empty-handed. I felt so sad and like I got kicked out."