Want an extra bowl or plate at this Ang Mo Kio hawker centre? You might need to pay 10 cents 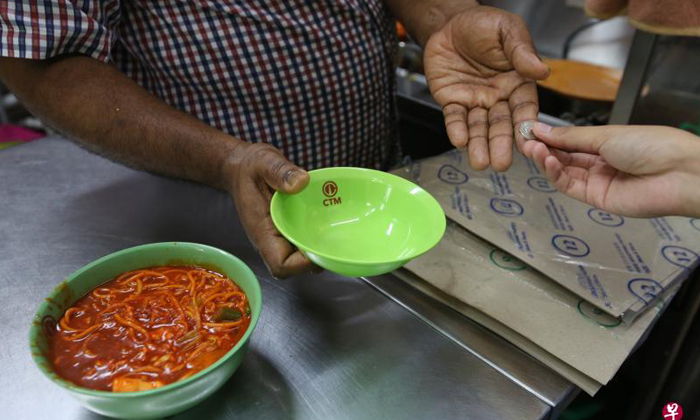 According to Shin Min Daily News, the Block 628 Market & Food Centre had closed for renovations in April this year and re-opened in June.

However, cleaning costs have increased due to a change in cleaning contractors.

When reporters visited the scene, stall vendors shared that before the renovation, they only had to pay a cleaning fee of $1,200 every month.

However, after the renovation and change in contractors, they are required to pay a tray collection fee of $450 per month, on top of ten cents for every plate or bowl cleaned.

The owner of a prawn mee stall, 48-year-old Mr Lin, said that he increased the price of one bowl of prawn noodles from $3 to $3.50 after considering overall costs. However, he does not impose the extra cleaning fee on customers.

On the other hand, another 48-year-old stall owner revealed that although he did not adjust the prices on his menu, he charges 10 cents for every extra plate or bowl that diners want.

Unfortunately, this has not sat well with some patrons.

Ms Lin, 25, who is self-employed, said: "Why the need to charge extra if it's not a takeaway?"

Another diner, Ms Tang, felt that it was unfair for consumers to bear the additional cost and said she would avoid taking extra plates or bowls unless necessary.

"The stall's capital cost is already included in the food pricing. Unless they don't increase the food prices, then I'm willing to fork out the additional 10 cents," added the 57-year-old retiree.

Nevertheless, there are still a handful of vendors who have voluntarily absorbed the additional operating costs.

They felt that there were not many patrons who would ask for an additional plate or bowl and were willing to accede to such requests, if any, at no extra charge.

"Those who come here are all regular customers, there's no need to be calculative over ten cents," one stall owner was quoted as saying.

Related Stories
Kopitiam poster to stop KFC customers from taking straws: "It could have been handled more diplomatically"
Man pays $6.40 for meal at Woodlands coffeeshop -- because of 'atas' sides
Toa Payoh eatery serves the most 'atas' beansprouts -- which cost $6
More About:
food
hawker centre
expensive