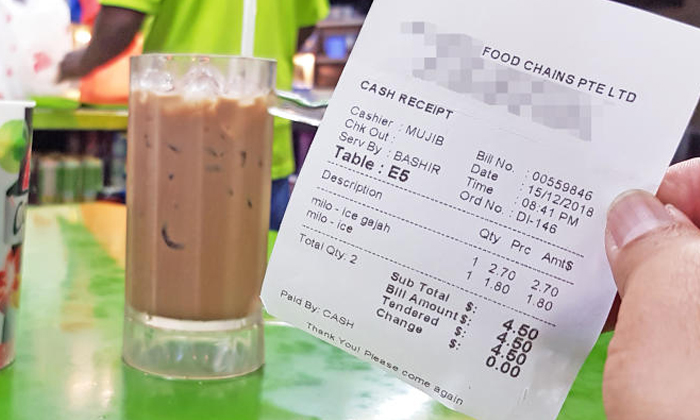 Would you pay $2.70 for a cup of iced Milo? Some netizens feel that it is too expensive, thus sparking a debate on the issue.

Facebook user Raymond Seow had shared photos of his Milo drink and the accompanying receipt in a post on Dec 15, along with the caption: "Damn expensive nowadays!"

His post has garnered over 100 comments to date, many of which agreed that the drink was pricey.

According to Raymond's receipt, the stall in question was located at Block 820 Tampines Street 51.

Besides a cup of iced Milo Gajah (meaning 'elephant'), Raymond had also purchased a plate of chicken briyani ​for $6.50.

Shin Min Daily News reporters visited the stall on the same evening and ordered a cup of Milo, confirming that it indeed cost $2.70.

However, the stall assistant revealed that this was actually 'Milo Gajah' and explained how it came in a bigger cup.

Reporters then purchased a regular cup of iced Milo from the stall, which they paid $1.80 for.

They found that there was a 30% difference when comparing the contents of both cups.

According to the stall assistant, customers who order iced Milo are typically served the upsized version.

When contacted by Shin Min, the 59-year-old stall owner said he started selling Milo Elephants about a year ago due to requests from customers. Business was not affected and customers are welcome to order the regular-sized Milo, he added.