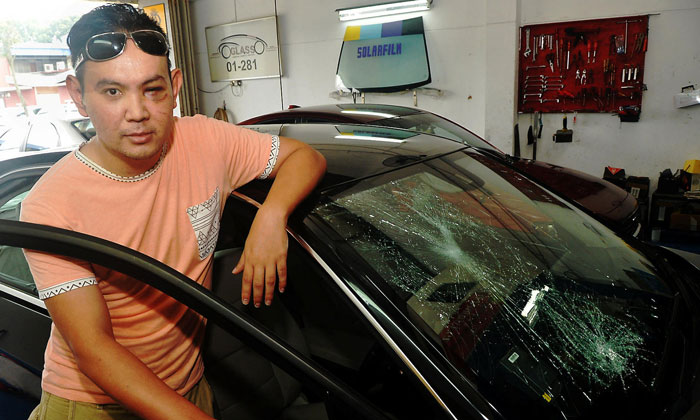 What started as a routine trip to Kuala Lumpur turned into a nightmare for a Singaporean businessman.

Mr Herman Zaidin, 31, was driving home to Singapore alone along the North-South Highway near Simpang Renggam in Johor on Sunday evening when a group of more than 10 men assaulted and robbed him.

The attack came after one of them claimed to have been injured after hitting his motorcycle against Mr Herman's car on the heavily congested road.

During the attack, one of the men even used a spanner to smash his Mercedes Benz's windscreen and hit his left eye.

"There is now internal bleeding in my eye and my vision is blurry.

"I'm very worried, as a doctor told me these's a possibility that my vision may be permanently affected after this," Mr Herman told The New Paper after visiting the hospital yesterday.

He has since made police reports about his ordeal in both Singapore and Johor Baru.

Singapore police and an officer at Simpang Renggam Police Station confirmed the reports.

The highway was congested with bumper-to-bumper traffic as he was driving home his Singapore-registered car at around 11.30pm.

He was in the left-most lane and was about 90km away from Tuas Checkpoint when he felt something hitting the rear of his vehicle.

When he looked at his side mirror, he saw a motorcyclist falling off his bike.

Worried that the rider could have been injured, Mr Herman said he stopped his car.

All of a sudden, more than 10 men, who looked to be in their late teens and early 20s, came towards him on motorcycles and surrounded his car.

Mr Herman said: "They accused me of causing the accident and started banging on my car. They also hurled vulgarities and asked me to step out.

"The rider who hit me also came forward and demanded a compensation. I panicked."

One of the men then took out a spanner and used it to smash his windscreen.

Seeing this, Mr Herman decided to wind down his window to talk to the men.

He said: "I had no choice as my window could have been broken next. I had to talk to them to find out exactly what they wanted."

What happened next took place so quickly that it seemed like a blur now, he said.

"One of the guys unlocked the door and opened it. Then they started to rain blows on me. One guy used the spanner and hit my left eye.

"With one hand, I held on to my seat belt while I covered my face with the other."

The men ordered him to get out of his car, but he refused as he feared they might drive away in it.

Realising that he would not budge, the men ordered him to hand over his wallet containing about S$300 and RM400 (about S$130)

After he gave in to their demands, they also helped themselves to his in-vehicle camera, his mobile phone and its power bank.

They also ordered him to open the boot from the driver's seat. When he gave in, they took his laptop computer which had been placed there and fled on their bikes.

Mr Herman said he lost about $2,400 worth of valuables.

He said: "I (later) stepped out of my car and when I went to the rear, I saw no dent there.

"I'm sure the accident was staged, for after the biker fell off, he immediately asked me for compensation.

"The ordeal lasted about 10 minutes, but it was the longest 10 minutes of my life."

Mr Herman said he was disappointed that no-one came to his aid.

"The road was congested so I'm sure many motorists saw what had happened. Maybe they thought it was a genuine accident or were just too afraid to step in."

In pain and nursing a badly bruised eye, he managed to drive to the Johor checkpoint. Due to the congestion, he only reached the checkpoint about 1½ hours later, when it usually takes 45 minutes.

He told the immigration officers about what had happened and they referred him to the Malaysian police.

Mr Herman continued his journey home after filing a report. By the time he got to the Tuas Checkpoint, it was already about 3am on Monday.

There, police and immigration officers saw his bruises and asked him what happened.

They called for an ambulance, but he declined the service as he wanted to go home first to park his car.

Mr Herman only called for an ambulance when he arrived home in the central part of Singapore.

He was taken to Tan Tock Seng Hospital, where a doctor told him that even though he had bruises all over his body, the main worry was his eye.

He now needs to go for further check-ups.

Mr Herman said: "Looking back, I'm lucky that my injuries were not life-threatening. The men could have stabbed me.

"However, the incident has left me shaken and I don't think I will be driving to Kuala Lumpur anytime soon. I will fly there instead until I feel brave enough to drive again."

Related Stories
Malaysian sees abandoned baby by side of road but this is why she's grateful she drove away
Arrested: 2 men suspected of robbing elderly guy of $10,000, phone and gold chain in Hougang
Getaway driver of brazen robbery jailed: 5 men took $24,000 from Woodlands money changer in broad daylight
Man robs masseuse, sexually assaults her for an hour and threatens to kick her private parts
robbers
robbery
assault
Malaysia
S'pore guys gets attacked and robbed in Johor