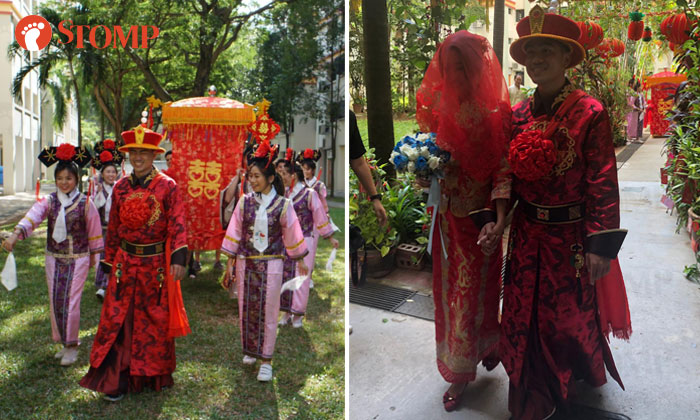 A couple's wedding in Woodlands was a sight to behold as the bride, groom and their entourage decked themselves out in traditional attire and walked from Drive 16 to Woodlands Ring Road on Sunday morning (Mar 3).

Stomper Emily, who is the aunt of the groom, shared photos and videos of the special occasion with Stomp.

A fan of hit Chinese show Story of Yanxi Palace, Emily told Stomp that the couple looked like the period drama's characters placed in a modern Singapore setting.

"My nephew was fetching his wife and bringing her to his family's home at Block 607 Woodlands Ring Road," she said.

In the videos, the bride is seen travelling to the groom's side in a decorated litter carried by the groomsmen with her bridesmaids walking alongside them.

The groom cuts a striking figure in red as he leads the procession.

Emily said she wanted to share this with Stomp as it was very unique.

"My nephew's father mentioned that he would like his son to have a traditional wedding," she said.

"I think it's very different and special.

"Most youngsters nowadays don't do it like this anymore."

Related Stories
Singaporean couple rides with motorcycle convoy -- right up to wedding reception
'I went to Bhutan on a holiday and ended up marrying my guide'
Singaporean woman once reported missing after going Romania to look for BF has married him
More About:
Wedding
unique
cool
tradition
couple
love