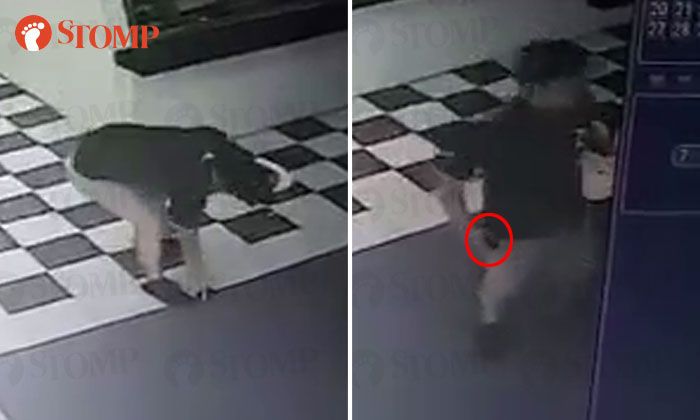 A man was caught on video picking up a wallet Stomper Sean had dropped at Sheng Siong Food Court in Jurong West on May 19 at about 2.45pm.

Sean was leaving the food court and did not notice when his wallet fell to the floor.

He approached the manager of the food court for CCTV footage to find out what had happened to it.

"The people at the food court were extremely helpful," he said.

In CCTV footage provided by the food court's management, a man who had just ordered a meal from a stall nearby notices Sean's wallet on the floor and bends down to pick it up.

He was then seen slipping it into the right pocket of his shorts before walking out of the video frame.

Sean told Stomp that his wallet contained around $300 but he said he was more concerned about his Employment Pass and work ID that were in it as well.

"I have to go about replacing these things," he said.

He noticed that the man who picked up his wallet was wearing a shirt with a company logo on it.

"I hope a member of the public might identify the logo so that I can identify the company and contact them regarding this," he said.

Ideally, it would be even better if the man who took the wallet came forward and returned it himself.

If you have any information regarding this man, kindly contact Stomp at stomp@stomp.com.sg or WhatsApp 9384 3761.

Related Stories
Man takes $125 worth of items from Tampines e-scooter shop during 80-min visit
Woman chats with cashier -- then takes his wallet from counter at Toa Payoh store
Guy takes phone and shoves it down his shorts at Ang Mo Kio shop after "distracting" owner
More About:
theft
stealing
caught on camera
wallet
food court