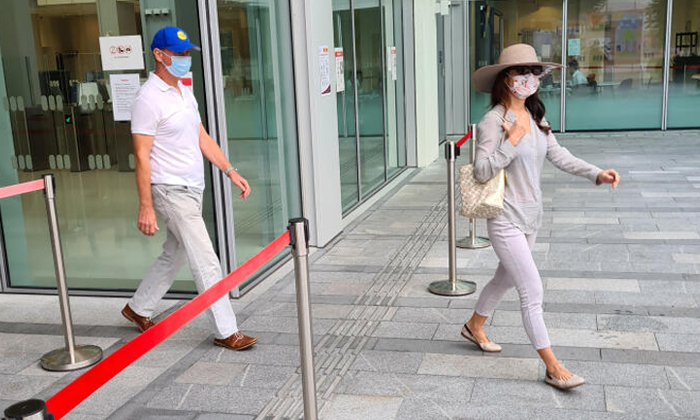 When a couple were spotted not wearing their masks properly, they allegedly refused to follow advice to do so and the woman is said to have pulled down the mask of one social distancing ambassador (SDA).

On Friday (April 1), the Singaporean woman and British man appeared in a district court over the alleged incident in Marina Bay Sands (MBS) last September.

Clariel Griffin, 47, who used to be known as Wong Pei Ling, was charged with one count each of being a public nuisance, using criminal force on a public servant and an offence under the Covid-19 (Temporary Measures) Act.

A search with the Accounting and Corporate Regulatory Authority reveals that she used to be a director of a firm called Spa Sauvignon - a wine-themed spa.

The man, Clive Ainsley Griffin, 55, is accused of one count each of being a public nuisance and an offence under the Covid-19 (Temporary Measures) Act.

Court documents do not indicate if the couple are married to each other, but his Facebook account says they are.

In an earlier statement, the police said three SDAs attached to the Singapore Tourism Board were performing their duties at MBS when they advised a couple to don their masks properly.

The police added: "The couple allegedly confronted the SDAs and refused to adhere to their advice despite repeated attempts. The couple then allegedly shouted repeatedly and gestured aggressively at the SDA officers.

"The woman also purportedly pulled down one of the SDAs' mask during the confrontation."

According to court documents, the Griffins were at The Shoppes at MBS between 10.20pm and 11pm on Sept 12 last year when they allegedly failed to wear their masks over their noses and mouths.

They are also accused of causing annoyance to the public by shouting and gesturing there. Clariel Griffin is also said to have pulled down an SDA's mask that evening.

The couple's cases have been adjourned to April 22.

For being a public nuisance, an offender can be fined up to $2,000.

For committing an offence under the Covid-19 (Temporary Measures) Act, an offender can be jailed for up to six months and fined up to $10,000.