Couple fined for kicking hotel staff, swearing at cop and paramedic while drunk 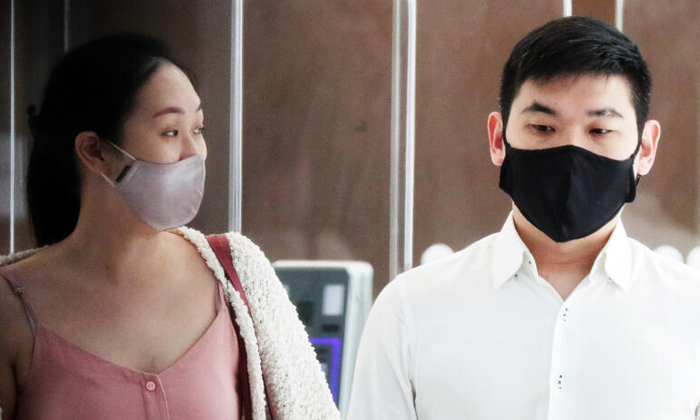 After drinking copious amounts of alcohol at a wedding, the couple caused a ruckus in a hotel lobby, breaking furniture and swearing at hotel staff, a police officer and a paramedic.

The court heard that the couple went for a wedding reception at Andaz Singapore hotel on March 21 last year, where they drank alcohol.

While they were seated in the hotel lobby, Teo made a ruckus, damaging a coffee table and trying to knock over chairs.

She also kicked a hotel staff member on his left shoulder.

Meanwhile, Foo looked like he was going to throw up and hotel staff tried to stop him and get the couple a taxi to leave.

Foo fell off the armrest of a chair he was sitting in and hurt one of his fingers, prompting a 995 call to be made at about 6.25pm.

While being attended to by a Singapore Civil Defence Force paramedic, Foo and Teo verbally abused the paramedic and other hotel staff.

When an officer arrived, Teo shouted and screamed repeatedly and directed a swear word at him.

Since Teo was not calming down and not wearing a mask, the couple were arrested.

Teo had previously been fined $200 for drink driving and disqualified from driving for 15 months, which Deputy Public Prosecutor Benedict Teong said showed a "lack of restraint when it comes to alcohol consumption".

The couple's lawyer, Mr Selva Kumara Naidu, raised a psychiatric report which said that Teo's depression and attention deficit hyperactivity disorder (ADHD) came to the fore under the disinhibiting condition from the "copious amount of alcohol" consumed.

However, DPP Teong argued that the report did not show or state that her mental conditions had a link to her offences.

District Judge Lee Lit Cheng noted that Teo caused a "prolonged annoyance" which lasted more than half an hour during which the couple harassed three people, all of whom were deployed to deal with the trouble they caused.

For using abusive words to a public servant while they are doing their job, offenders face a fine of up to $5,000, a jail term of up to 12 months or both.

Failing to wear a mask is punishable by a fine of up to $10,000, imprisonment of up to six months or both.

For causing annoyance to others while drunk, offenders can be fined up to $1,000, jailed for up to six months or both.