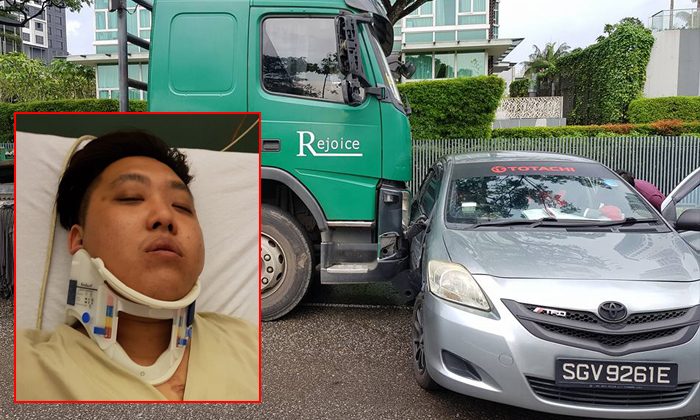 A couple were en route to the National University Hospital (NUH) to visit their youngest child, who suffers from heart failure, but ended up there with injuries following a traffic accident.

They were travelling along West Coast Highway on Jan 28, at around 3.10pm, in their Toyota when a prime mover hit them.

The driver, sales executive Jason Ho, shared dramatic footage on Facebook showing how the prime mover had sideswiped his vehicle and "dragged it for 5m to 10m after the impact".

He also provided more details about what happened:

When contacted by Stomp, Jason said he and his wife had been travelling from Pandan Gardens to NUH when the collision occurred.

The couple, both aged 30, were planning to visit their 20-months-old daughter, who has been warded in NUH's Paediatric Intensive Care Unit (PICU) for two months due to heart failure.

"Actually, doctors have asked us to prepare for the worst. She may need to stay [in the hospital] until she leaves us," Jason told Stomp.

However, the traffic accident led to the couple being sent to NUH for their injuries.

The father of three said: "I was in pain after being hit and became semi-unconscious. It all became clearer to me only when I was in the hospital."

It was his wife who called the ambulance while a passer-by contacted the police.

Jason, who suffered injuries to his neck, spine, neck and left hand, shared that he was hospitalised for four days and given 13 days of medical leave.

Meanwhile, his wife injured her back and was given three days of medical leave after being taken to the A&E department at NUH.

Jason, who also previously suffered from heart failure and underwent a transplant 11 years ago, added: "The prime mover driver does not want to admit that he sideswiped me during the accident.

"The workshop, who is authorised to do my claims, told me that my chance of winning the dispute is only 80 to 90 percent. They said winning 100 percent is impossible.

"I don't get it as I was just driving in my lane when I got hit by the prime mover driver, and now I have to pay for the damages.

"So I really need passers-by who witnessed the accident to provide their videos and help me."

In response to a Stomp query, the police confirmed that they were alerted to the accident and said a male victim was conscious when taken to the hospital.

Related Stories
"If I die, can you name your future child after me?": 6-year-old cancer patient’s last words to parents
Cancer patient, 8, suffers relapse and asks mum:"Why not kill me and give birth to me again?"
Man in Taiwan gets engaged to pregnant girlfriend -- who had been killed in accident
More About:
accident
injured
heartbreaking
tragic