"If I die, can you name your future child after me?": 6-year-old cancer patient’s last words to parents 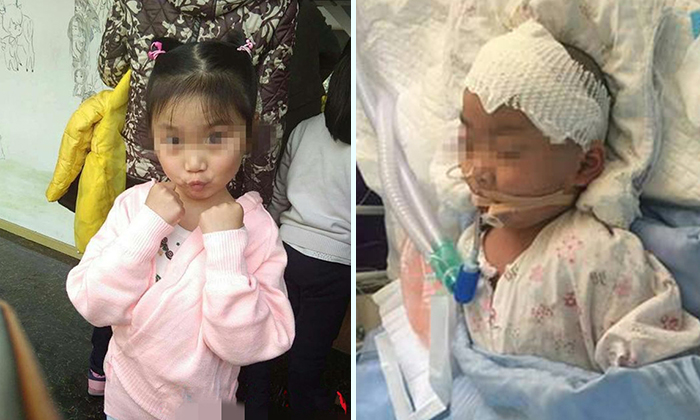 A six-year-old Chinese girl from the province of Jiangsu, China, was diagnosed with a brain tumour in May this year.

She underwent a surgery to remove it on Jun 21, only to slip into a coma and subsequently passed away on July 14, 2017.

Her parents still recall her heartbreaking last words to them before heading into the surgery theatre: "If I die, can you name your future child after me? I’m afraid you’ll forget me."

The tragic event started in May 2017, when the girl suddenly experienced headaches and nausea. Her parents initially brushed it off as the common flu, but a visit to the doctor proved otherwise.

She was discovered to have a tumour in her brain.

Desperate to save their beloved daughter’s life, the parents transferred her to a hospital in Shanghai, where she was hospitalised for more than 20 days, chalking up medical bills of more than RMB200,000 (S$40,342).

By then, news of the tragedy had spread across the country and the girl’s uncle was able to raise about RMB160,000(S$32,274) through various crowdfunding platforms.

The girl’s father even promised to do his utmost best to return the money to the donors once the ordeal was over.

Unfortunately, their efforts proved to be in vain after the girl tragically passed away on July 14. With her death, the crowdfunding efforts came to an end as well.

Some people even thought that they had donated too little which led to the termination of the efforts, reports World of Buzz.

The grieving parents, who wanted to spare the public the terrible news, had even lied, telling the donors that their daughter was getting better.

Those who later came to know the truth said that they did not want their money back.

Said a donor: "The donation made is out of love. It doesn't need to be returned or reciprocated.”

Despite their kindness, the parents insisted on returning the funds.

The girl’s father, who kept a notebook containing particulars about each donor and the amount they contributed, said that he would refund the money as it was a promise he had made to himself.