Cancer patient, 8, suffers relapse and asks mum:"Why not kill me and give birth to me again?" 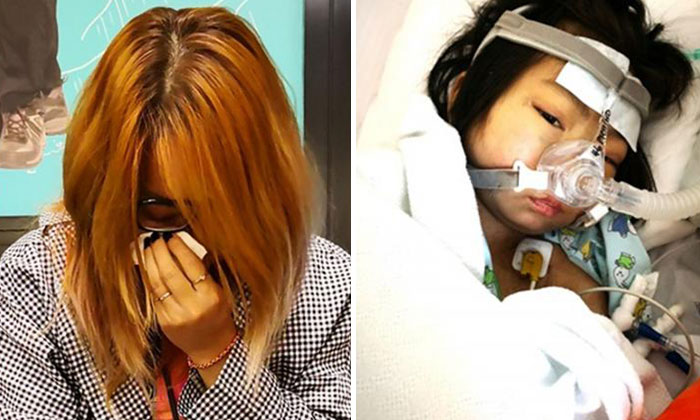 After battling cancer for two years, a young girl suffered a relapse in January 2018, and within the span of a month, was moved in and out of the paediatric intensive care unit (PICU) four times.

It was reported by Lianhe Wanbao last year that in 2016, Zelle, now 9, suddenly grew a bump on her head.

Despite several rounds of X-rays and scans, the doctors could not find anything wrong with her.

Zelle’s parents ultimately decided on a surgery to remove the bump.

To her parents’ horror, worm-like parasites came wriggling out of the bump as Zelle writhed in pain.

Her parents rushed her to a hospital where a surgery was conducted on her immediately.

However, things only got worse from there.

In April 2016,  Zelle was diagnosed with leukaemia and was given a choice to undergo chemotherapy or a bone marrow transplant.

The news took a heavy toll on the family, and Zelle’s mother, Mrs Lee had an emotional breakdown.

Despite knowing that the transplant could be fatal, the precocious Zelle told her mother that she would rather take the risk than wait for a miracle to happen.

The transplant was successful.

With the surgery however, came a chance of relapse in the future as well as increased chances of getting other types of cancer.

Alas, it was not the end of the bad news.

In January 2018, Zelle suffered a relapse and is currently fighting for her life in National University Hospital’s PICU.

According to Mrs Lee’s post on Give.asia, Zelle suffers from a myriad of conditions, including respiratory issues due to lung infection, high blood pressure, swelling in her kidney and splint, fungal infection in her lungs, as well as a bacterial infection on her blood.

Mrs Lee said that Zelle’s condition is precarious at best.

“Due to her fungal infection, chemotherapy complicates the treatments. Her situation is not optimistic. I can’t lose her and I am looking for all alternatives, hopes and a miracle.

“We need help! I can’t lose her. We’ve come so far and been through so much. Please help her.

“She coughs blood and has a blood clot in her left lung blocking the airway which causes her breathing difficulties.”

Mrs Lee also revealed that Zelle had once asked her, “why not kill me and give birth to me again?”

The mother broke into tears at those words as she could not give her daughter an answer.

“Mummy, you’re the best mom in the world and I don’t want any Mother and I love you. Mummy, I’ll fight for you. I’ll fight this sickness for you!”

Currently, the family faces financial difficulties as well, with medical bills racking up to $75,000.

Mrs Lee, added that she was supposed to start work in January, but with Zelle’s fragile condition, had to turn down the opportunity.

“We’re really worried about Zelle’s condition, and my husband and I are physically, mentally and financially drained.

“I’m seeking your kind help to keep Zelle going. Please help us to share this campaign with your friends and also help to pray for Zelle. Thank you from the bottom of my heart.”