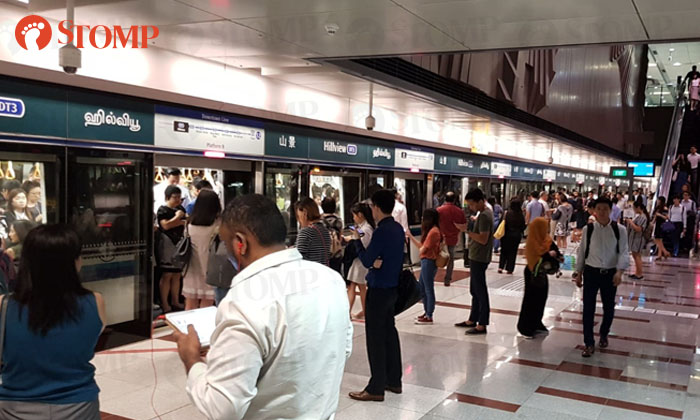 A signalling fault that occurred on the Downtown Line (DTL) this morning (May 24) caused crowds of commuters to be stranded at several stations.

Stomper Mark, who was stuck at Hillview station along DTL 3, said that he waited for 15 minutes before he could board the train.

Mark said: "There was a delay on the Downtown Line since 8.08am."

In a photo Mark shared with Stomp, a train could be seen packed to the brim while other commuters waited outside for the next one to arrive.

According to The Straits Times, SBS Transit later confirmed that train service had been delayed due to a glitch at Tampines West station.

Commuters along the entire line were affected.

A photo posted on Twitter showed how crowded the platform was at Bedok North station.

SBS Transit did not issue any updates about the fault on its social media pages, but later confirmed in a statement to ST that train service had been delayed due to a glitch at Tampines West station.

"On the approach to this station for both directions, trains had to be manually operated. This resulted in a slowdown in train speeds," SBS Transit's senior vice-president of corporate communications Ms Tammy Tan said.

"Trains continued to arrive at stations but instead of the usual two-and-a-half-minute headway, it lengthened to about five minutes. This resulted in more crowded trains and a build-up of passengers at station platforms," she added.

"For example at Bedok Reservoir station, some passengers may have waited up to about 15 minutes to board a train and the platforms were crowded.

"The signalling processor was successfully reset at about 8.15am and normal service progressively resumed thereafter."

Ms Tan had also apologised to commuters for the inconvenience and for not issuing any alerts, adding that SBS Transit is investigating the cause of the fault with the Land Transport Authority (LTA) and its vendor.