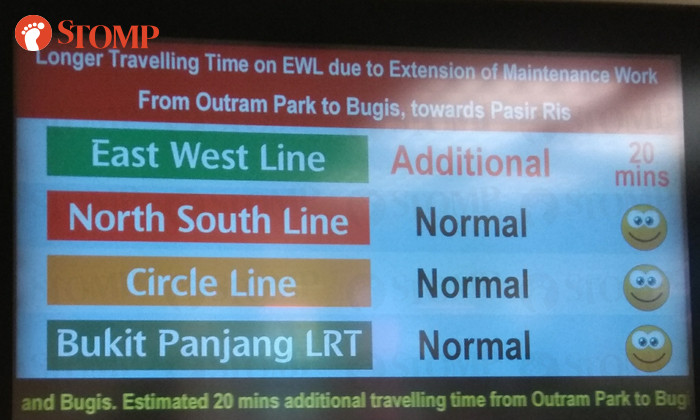 Stomper Alex alerted us to the disruption, in a photo that he sent to Stomp.

At 6.19am, train operator SMRT announced on Twitter that commuters can expect additional 20 minutes of travelling time from Outram Park to Bugis towards Pasir Ris.

[EWL]: Due to a track fault, pls add 20mins train travel time from #OutramPark to #Bugis towards #PasirRis. Free regular bus svcs btwn #OutramPark and #Bugis. Our station staff will assist.

Alex, who boarded the first train from Dover, told Stomp, "The train kept stopping. At Outram it stopped for about 10 minutes."

"I usually reach Raffles slightly before 6am, but now I reach around 6.30am," added Alex.

Normal train operations resumed between the affected stations at around 6.33am.