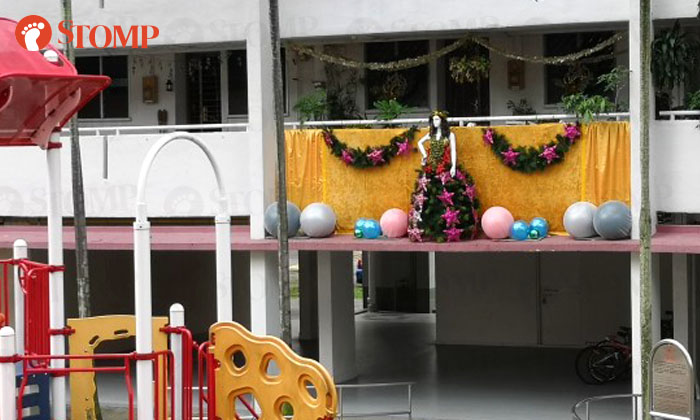 A resident at Block 351 Clementi Avenue 2 was advised by Jurong-Clementi Town Council to scale down and shift the Christmas decorations placed on a ledge outside their unit to a safer place.

The stunning decorations were seen outside a second-storey unit of the block on Dec 7.

Stomper Augustana sent us a picture of the decorations, but was concerned that the decorations might pose safety hazards to passers-by on the ground floor.

The decorations included balls of different colours and sizes, which appeared to be stuck on paper or cardboard placed on the ledge.

The focal point of the decorations was a beautifully decorated mannequin, adorned in leaves and glittery stars against a yellow backdrop.

Augustana, however, was worried about passers-by's safety and told Stomp: "The mannequin and Christmas decorations are placed on the ledge of the second storey.

"Right under the ledge is a footpath which leads children to the playground."

She is concerned that the decorations may fall and hit the children in the area.

She said: "I hope the resident of the unit is more considerate of the safety of others."

In response to a Stomp query, a spokesman from the Jurong-Clementi Town Council said: "We visited the place and spoke to the resident, who appreciates our concern over the safety aspect.

"We have checked the fastening method and found that the decoration pieces are adequately secured.

"However, as the decoration had encroached onto the common area, we had asked the resident to scale down the decoration pieces and shift them to a place which is safer for everyone.

"The resident understood our advice."

Related Stories
Woodlands resident takes things too far with bamboo poles -- literally
Boys throw clothes rack off building: "Don't save video and post"
Woman cleaning with one foot on ladder and another on window ledge is accident waiting to happen
More About:
pretty
decorations
Christmas
dangerous