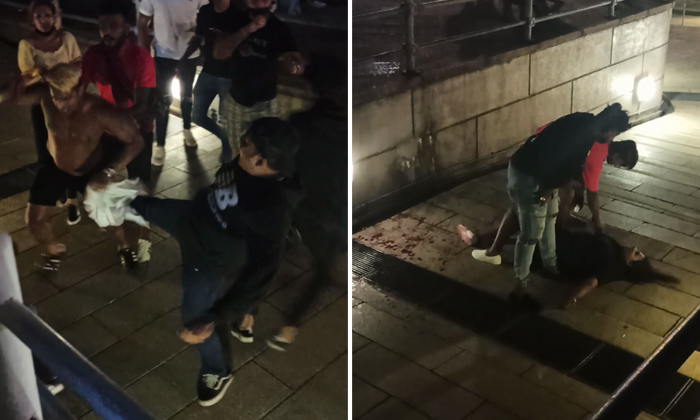 Another seven suspects have been arrested in connection to a violent brawl that occurred in Clarke Quay on Saturday night (Dec 19).

This comes after the arrest of five men.

Police were alerted to the fight at Eu Tong Sen Street at around 10.40pm.

The altercation involved two groups of people and had started due to a dispute in a nearby restaurant, The Tipsy Cow.

Three people were taken to hospital, including a 40-year-old man who had been involved in the fight. He was subsequently arrested at Carpenter Street after being found hiding at a dark corner of a back alley with injuries.

According to Lianhe Wanbao, the other two injured parties are a couple who had dined at the restaurant and not acquainted with those involved in the fight.

The couple had paid their bill and left the restaurant upon seeing the fight, but got injured with a knife amidst the chaos.

In a statement on Tuesday (Dec 22), the police said they have arrested another six men, aged between 22 and 33, and a 22-year-old woman for their suspected involvement in the case of rioting armed with a deadly weapon.

Between December 20 and 21 officers from the Criminal Investigation Department and Central Police Division conducted island-wide raids and arrested the seven subjects for various alleged offences in connection to the riot.

Four men were charged in court on Monday for the alleged offence of rioting armed with a deadly weapon.

Another 30-year-old man, who was previously arrested on Sunday, will be charged with voluntarily causing grievous hurt by dangerous means on Tuesday.

Following the latest arrests, four of the six men, aged between 22 and 30, will be charged in court for the offence of being a member of an unlawful assembly on Tuesday.

The other two men, aged 26 and 31, will be charged for voluntarily causing grievous hurt by dangerous means and rioting with a deadly weapon respectively on Wednesday.

Investigations against the 22-year-old woman are ongoing.

The offence of being a member of an unlawful assembly is punishable with a jail term of up to two years and/or a fine.

The offence of voluntarily causing grievous hurt by dangerous means is punishable with life imprisonment or a jail term of up to 15 years, and caning or fine.

The offence of rioting with a deadly weapon is punishable with a jail term of up to 10 years and caning.

The police said that investigations are ongoing, adding that they will "spare no effort to apprehend such offenders and deal with them in accordance with the law."