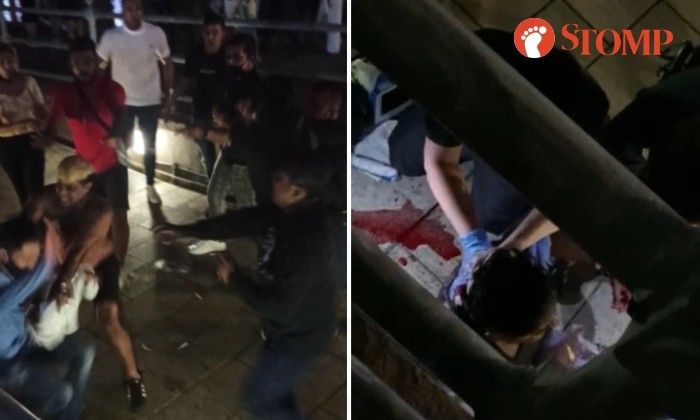 Five men, aged between 21 and 40, were arrested for their suspected involvement in a case of rioting armed with a deadly weapon at Eu Tong Sen Street.

The police said in a statement that they were alerted to a fight between two groups of people on Saturday (Dec 19) at 10.40pm.

In videos that have been circulating online and which several Stompers shared, about ten men can be seen pointing and shouting before lunging at each other to throw punches.

The brawl then moves to the entrance of an underpass with a few men attempting to stop the fight between the two groups.

A man can be seen lying on the ground as two others bend down to check on him.

The video then cuts to a scene where paramedics and policemen attend to the men injured on the ground.

A man appears to move towards one of the injured men but gets yelled at by a woman who screams: "Excuse me! Faster, move, move!"

Another injured man can be heard screaming in pain as he sits up from the blood-stained ground.

The next clip then shows a man in a red shirt getting arrested and escorted by five policemen.

Subsequent videos capture the crowd at the scene of the fight. Police cars and an ambulance can also be seen stopped at the side of the road.

Other videos of the fight have been circulating on Facebook as well, with one of the videos posted by ROADS.sg amassing over 115,000 views.

Stomper Khang, who was at the scene, snapped some photos showing a crowd gathering to watch the aftermath of the fight. 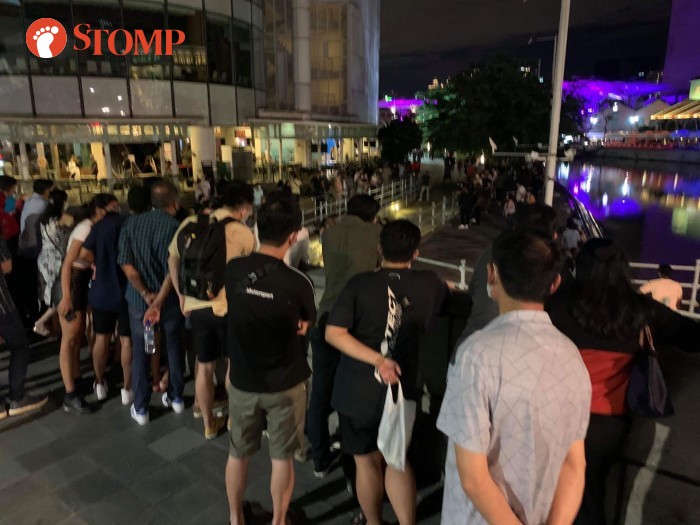 The police added in the statement that officers found and attended to two injured people when they arrived at the scene.

"At this point, the suspects from the two groups had fled the scene and some members of the public were assisting the injured people," said the police.

"A 27-year-old woman and her 36-year-old male companion were conscious when conveyed to the Singapore General Hospital.

"Separately, a 29-year-old man was arrested at scene for disorderly behaviour during the course of the investigation."

A 40-year-old man was subsequently arrested in the vicinity of Carpenter Street for his suspected involvement in the fight.

He was found hiding at a dark corner of a back alley with injuries and was conveyed conscious to the Singapore General Hospital.

Officers from the Central Police Division and Criminal Investigation Department established the identities of some assailants who were involved in the fight by using images from CCTV cameras.

Four men, aged between 21 and 34, were also arrested by the police 16 hours after the incident.

The police said that a manhunt operation is currently underway to arrest the other suspects involved in the case.

Preliminary investigations revealed that the fight between the two groups had started due to a dispute in a nearby restaurant.

"We will not tolerate such brazen acts of violence and blatant disregard of the law and will spare no effort to apprehend such offenders and deal with them in accordance with the law," added the police.

The offence of rioting armed with a deadly weapon carries a jail term of up to ten years and caning.