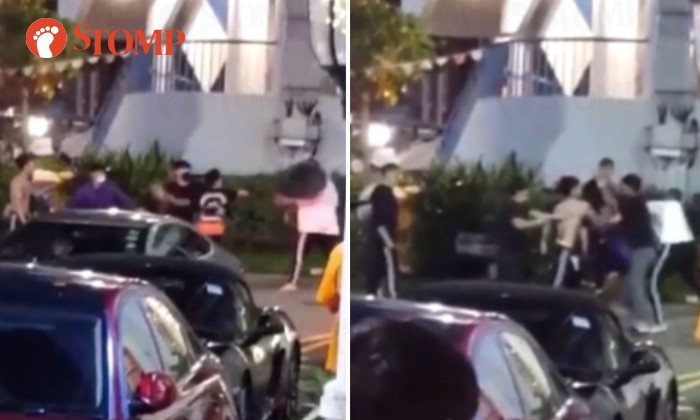 A video of a large group fight has made its rounds on social media over the weekend, and a comment made by the cameraman could not have summed it up better: "Wah, WWE leh."

Well, the fight may not have been as professional as World Wrestling Entertainment (WWE) matches, but it definitely was equally entertaining.

The fight broke out on (Thursday) Dec 10, and seemed to have involved about 12 men.

The video starts out by showing a group of about six men walking across the road towards another group of men.

A man in white on the other side of the road sees the group of men and brings his fists up towards his chest, in preparation for, well, a WWE battle.

The first group then surrounds the man in white and the brawl slowly moves from the grass patch towards the road.

Another man can be seen taking the lid from a barrel meant for burning paper, possibly to use as a 'weapon'.

The man smacks his opponent with the lid, making a loud metal sound which causes passers-by to turn their heads and the cameraman to get excited.

The cameraman then says: "Wah, WWE leh," just before the man in white grabs the metal lid from the ground and throws it at the group of men.

The video then ends abruptly after the men move out of frame.

In response to a Stomp query, the police said they were alerted to a case of fight at 10.45pm.