Chonky boar gets stuck between railings, man pats its butt for encouragement 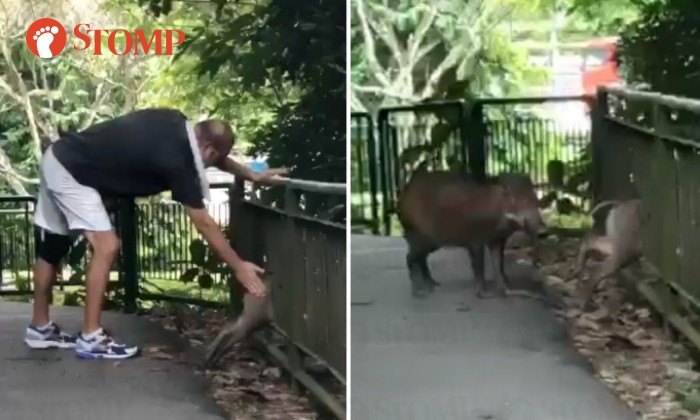 Wild boars seem to be a common sight these days.

Just last week, a boar pounced on a woman's bicycle at Pulau Ubin in an attempt to take off with some curry puffs.

In another wild boar sighting, Facebook user Zarin Yusri shared a video of a couple of boars getting stuck between railings.

The video, which was posted to Singapore Hikers' Facebook group on Thursday (Nov 26), has since gone viral after being circulated on social media.

In the video, a wild boar can be seen getting stuck between the railings as his friend stands back to watch the struggle.

The friend then makes an attempt to get through the railings but gets stuck as well.

The first boar subsequently manages to break free and passes through the railings, leaving his friend in the lurch.

The stuck boar then pauses for a good five seconds for comic effect before proceeding to struggle and wiggle his way through, but to no avail.

Later in the video, a jogger walks past and tries to move the railing to let the boar get through. That too, seems to be in vain.

The jogger then bends down and gives the boar a couple of pats on its butt as it makes high-pitched grunts in a desperate attempt to break free.

The video then cuts abruptly, leaving netizens curious as to what happened next.

In response to a Stomp query, Dr Adrian Loo, Group Director of the Conservation and Wildlife Management at National Parks Board (NParks), said: "If you encounter a wild boar, remain as calm as possible and move slowly away from the animal. Keep a safe distance and do not corner or provoke the animal."

Dr Loo added that if adult wild boars are seen with young piglets, members of the public are reminded to keep a distance and leave them alone, as they are potentially more dangerous and may attempt to defend their young.

Members of the public may also call the Animal Response Centre at 1800-476-1600 or contact NParks to report any wild boar encounters.