Driver who played victim in video might actually be in the wrong: Stomper does "CSI" to prove his 'guilt' 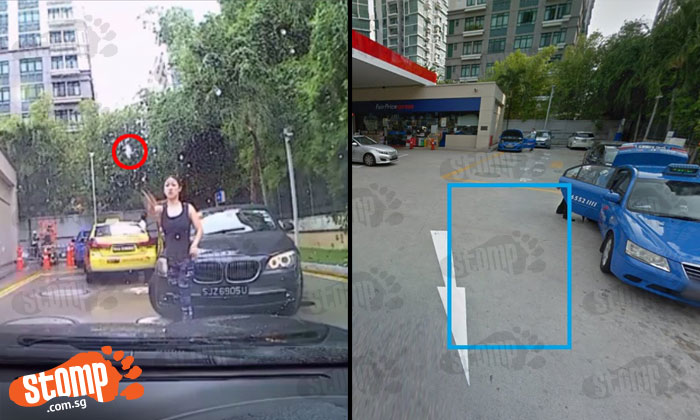 The driver who accused a female BMW driver of refusing to give way to him and hurling insults at him might have been the one driving on the wrong side of the road.

Previously, Stomper 926 sent us a video of a female BMW driver throwing an object at his windshield and taking photos of his vehicle at the Esso petrol station at the corner of Jervois Road and River Valley Road last Thursday (Dec 1) at 11am.

According to the Stomper, the female driver became aggressive because the Stomper was blocking her way as she was trying to leave the petrol station.

The Stomper can be heard telling the woman in Chinese: "If you don't know how to drive your car, I will drive it for you!" The woman allegedly hurled insults in response.

His video ends with her smoothly exiting from the ample space on his left.

That seems pretty typical, but here comes the twist in the story: Stomper harrypotter did a little Crime Scene Investigation (CSI) and sent us a follow up photo from Google Maps which shows Stomper 926 to actually be in the wrong: His car was stopped right on the arrow indicating the exit.

The entrance was to his left, hence the ample space which the woman drove through later.

Traffic laws state that she had right of way, and that Stomper 926 should have given way to her.

Related Stories
Driver in Malaysia claims to have gotten summoned for driving in ripped jeans, but sharp-eyed netizen points out the actual reason
Hoseh liao: BMW driver smashes right into back of police car along Evans Road
BMW driver stops in the middle of the road and accuses man of tailgating him
argument
BMW