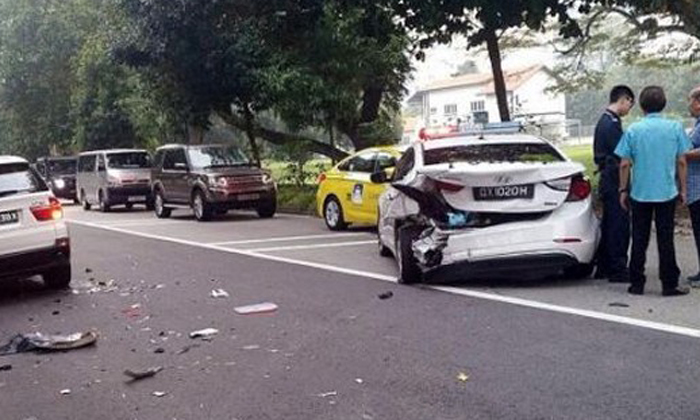 He was at his security guard desk at the entrance of yo:HA hostel's Evans Road branch yesterday when a loud bang jolted him from his seat.

Rushing out to the main road, Mr Vincent Pereira, 61, saw a police car with a crumpled rear.

Behind it was a white BMW X5 with damaged headlights.

When two young children alighted from the BMW, he got worried.

Fortunately, they were all right.

A police spokesman told The New Paper that at around 7am, a car, a taxi and a police vehicle were involved in an accident.

The crash happened along Evans Road, off Bukit Timah Road, near the yo:HA hostel @ Evans and a Mr. Prata restaurant.

Two or three policemen from the Bukit Timah Neighbourhood Police Centre (NPC) had been in the police car, said the spokesman.

They were trying to make a right turn and had stopped for oncoming traffic.

The BMW, which was behind it, could not brake in time and hit the police car, causing it to surge forward and collide with a yellow ComfortDelGro taxi coming from the opposite direction.

Mr Pereira told TNP: "I was going about my business when I heard a very loud bang.

"I expected it to be a car crash so I went out to check.

"The cars were badly mangled. The right headlight of the BMW was completely gone and the left rear of the police car was destroyed."

He said he saw the BMW driver, a woman, get out of the car with a boy and a girl, whom he believes are about primary school-going age.

TNP approached the woman, who appeared to be in her 30s, but she declined to comment.

Mr John Peter, 50, an employee at Mr. Prata, said: "(The staff here) had just started work when I heard a loud crash.

"I quickly went out of the restaurant to see (what was going on) and (there was) debris all over the road."