Cat plunges 11 floors to its death after slipping out of net at Jurong West block, SPCA reviewing case 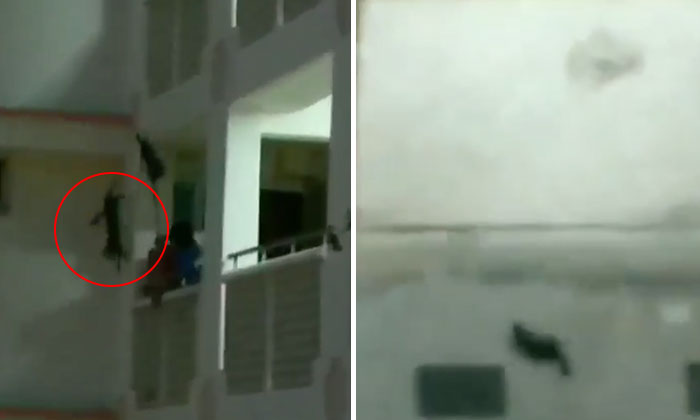 A black cat which was trapped on the 11th-floor parapet of a Housing and Development Board (HDB) block at Jurong West plunged to its death after it slipped out of a net during a rescue attempt.

A resident of the block, Nadhir Montara, 22, told Lianhe Wanbao that he discovered that a black cat had climbed onto the parapet at around 11pm on Saturday for reasons unknown.

“At the time, I was talking to my neighbours from the 11th floor. After that, I saw the cat jump onto the parapet. I wanted to rescue the cat immediately, but I realised how dangerous it was at the last moment and decided against it.”

Mr Montara added that he was involved in rescue operations in the past, and knew that adequate tools are needed to carry out the operation.

He said that recklessly diving into the operation could endanger both cat and rescuer.  Thus, Mr Montara, called the Prevention of Cruelty to Animals (SPCA) for help.

Mr Montara said SPCA officers showed up at the block at about 12am, and attempted to use a net to retrieve the cat.

However, they did not succeed even after various attempts.

He then started filming the process when an officer managed to get the cat into the net. However, the frightened animal struggled to escape, ultimately plunging to its death.

A video of the incident was uploaded onto Twitter.

In the video, bystanders can be heard gasping in shock after the cat slips out of the net and fell.

A loud bang could be heard as the cat hits the concrete ground.

It is seen moving momentarily as if trying to get up.

The video has since been taken down.

SPCA later confirmed that the cat died minutes later after the fall before officers could bring it to a vet, reports The Straits Times.

Dr Jaipal Singh Gill, executive director of SPCA, said in a statement: "The SPCA deeply regrets the loss of the cat's life. High-rise rescues do not come without a significant level of risk and our officers take various options into consideration before any rescue attempts are made."

He said that the sad outcome was distressing for the SPCA, the officer who had successfully saved many cats from ledges in the past, and the witnesses present.

"As part of our standard procedures, a review of the case will be carried out.”