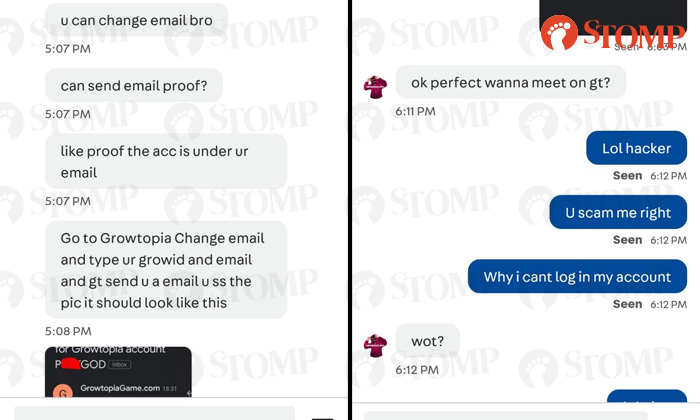 A Carousell user thought that someone was genuinely interested in buying over his gaming account. By the time he realised that he had fallen for a scam, it was too late.

Stomper JK said he had listed his Growtopia account for sale at $100 on online marketplace Carousell, which a user known as @pleasanthooman responded to.

JK explained: "It's a game that was trendy a few years back and which I don't play anymore, so I tried selling it to earn money.

"You can change your email for this game and this buyer requested that I send him a picture of my email confirmation to prove that the account is mine."

Sounds legit? Well, that's what JK thought too. He then sent the buyer a screenshot as asked.

However, by doing so, JK gave the buyer an opportunity to link the game account to the latter's own email instead, thus locking JK out of the account.

JK said: "I sent him a screenshot of the email confirmation. He copied the link from the picture and directly changed the email to his email so I could no longer login to my account.

"Right after I sent the picture, I could not log on to my account anymore. I realised what he had done and that I technically just got scammed.

"He did not pay me and he refused to admit what he had done."

JK said that the scammer "looked experienced" and was "really quite pro", adding: "He then started ghosting me. Basically, he acted innocent and played dumb before disappearing.

"I reported him on Carousell but I don't think anything was done."

Related Stories
Carousell apologises for 'incorrect' response to report about verbally abusive user
Buyer can tell $348 bag is 'fake at first glance', but seller insists it looks different in every country
Couple in their 20s lose $277k in staycation scam on Carousell
More About:
scam
Carousell
text