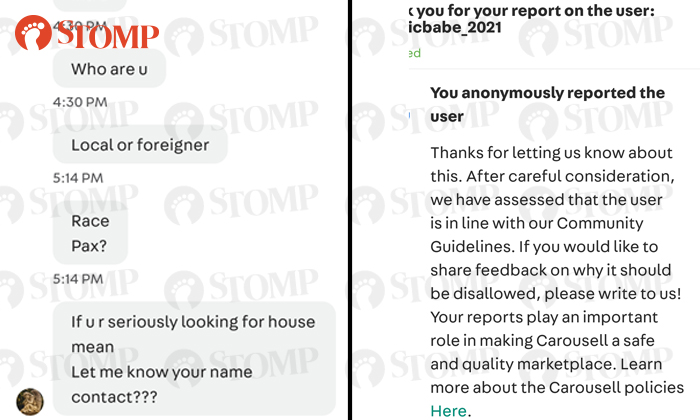 Online marketplace Carousell has apologised for an "incorrect message" that was sent in response to a Stomper who reported a verbally abusive user on the app.

Stomper Thung said he had approached a landlord who had places for rent listed on Carousell in early Febraury.

He shared: "I approached a landlord as I was interested in renting a place to stay. However, I got quite annoyed when the landlord asked for my race. So I just ignored her but she kept on aggressively messaging me."

Screenshots show the user repeatedly asking Thung about himself despite a lack of response.

Thung added: "In the end, I daringly told her that she was too fierce and hence I didn't think I would want to rent a place from her. She then went on to scold me the f-word.

"I reported her to Carousell but because she had deleted her messages, Carousell said there was no breach based on their review.

"Carousell should seriously consider re-looking at all these reports more closely." 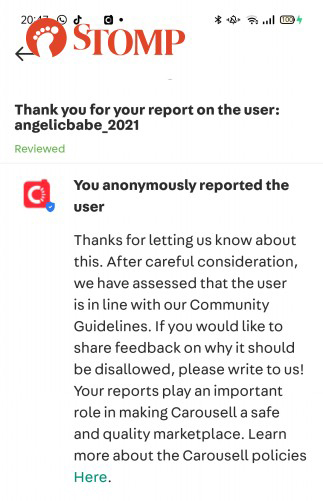 In response to a Stomp query, Ms Su Lin Tan, Carousell's chief of staff and vice president of operations, said: "Carousell does not condone offensive or discriminatory behaviour.

"The seller's behaviour violates our community guidelines and they have since been restricted from our marketplace.

"We apologise for responding with the incorrect message to the user report.

"We will be ramping up our efforts to review user reports with more accuracy and will ​continue to invest in improving our marketplace capabilities to provide a safe and conducive environment for both buyers and sellers to transact."

Related Stories
Carousell takes down listings 'selling' Changi Airport, Singapore Flyer at absurd prices
Missing McDonald's? You can get them on Carousell... for as high as $70k for a burger
Hunting for limited edition Star Wars Coca-Cola bottles? They are on Carousell at 'sky-high' prices
More About:
Carousell
rude
bad service
text