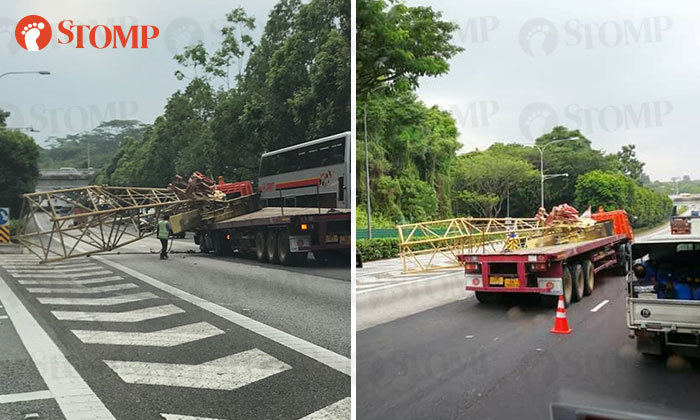 Cargo, including a two-tonne crane boom, toppled and fell off the back of a trailer on the Pan-Island Expressway, just before the Adam Road Exit on late Monday afternoon (April 2).

Stomp was alerted to the incident by Stompers Leong and Ah Boy, who said that a friend witnessed the aftermath of the incident at around 5.58pm.

According to The Straits Times, the 31-year-old driver of the trailer had been on the third lane of the four-lane road.

Mr Imran Ibrahim, the operations manager of the construction and shipping firm that employs the driver said he received a call from the driver, informing him about the incident at around 4.40pm.

Mr Imran said that the driver was travelling towards Tuas on the PIE, and had engaged his brakes to avoid an accident, causing the crane boom and counterweight to topple.

He added: "Thank God no one was hurt and nothing was damaged."