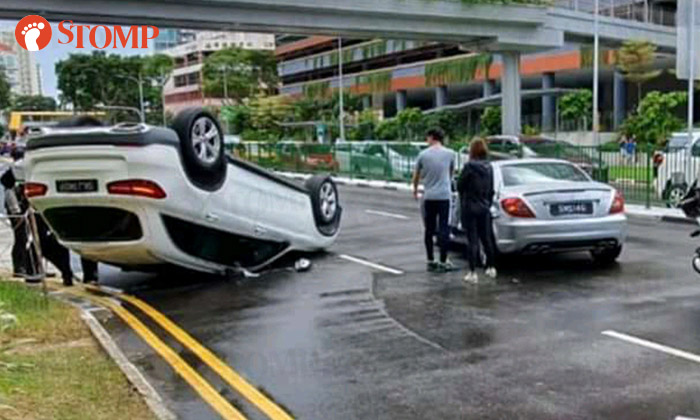 A car overturned after an accident involving another car occurred at the junction of Sims Avenue and Tanjong Katong Road on Saturday afternoon (Jan 4).

Stomper DH was walking along a nearby overhead bridge when he suddenly heard a loud 'bang'.

He contributed photos of what he saw and told Stomp: "After hearing the 'bang', I looked around and saw a car overturning.

"I didn't see how it happened, all I saw was the car flipping over in very slow motion.

"The first thing that went through my head was to call the police and the ambulance.

"I stuck around for a while and only left when I saw the ambulance arriving.

"The ambulance was at the scene somewhere within the next 10 minutes.

"I was standing quite far away but from what I see, the driver of the overturned car looked to be a male. That's what I could make out of from the silhouette.

"The driver was still stuck in his car and I saw passers-by trying to get him out but they couldn't do much.

"I was shocked and didn't expect this to happen but I still thought that it was an urgent matter and I had to call for the police and ambulance first.

"You won't know if there are kids or other passengers that could be seriously injured.

Responding to a Stomp query, the Singapore Civil Defence Force (SCDF) said: "On Jan 4 at about 2.10pm, SCDF responded to a road traffic accident at the junction of Sims Avenue and Tanjong Katong Road.

"Two persons were assessed by SCDF paramedic and they subsequently refused conveyance to the hospital."

Stomp understands that the parties involved settled the matter privately.