Motorcyclist, 33, taken to hospital after accident along Admiralty Road West 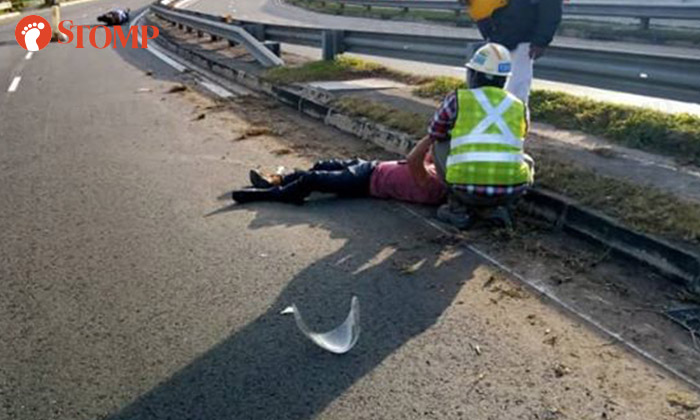 A 33-year-old motorcyclist was taken to hospital after an accident along Admiralty Road West on Saturday morning (Jan 4).

Stomper Park was passing by the scene of the accident and contributed photos and a video of what she saw.

She told Stomp: "I was on a lorry going towards my workplace nearby at about 7.55am.

"I then heard a lot of honking sounds and when I looked around, I saw a guy lying on the road."

From the video, several Singapore Civil Defence Force personnel can be seen helping a man onto a stretcher.

Park added: "I rushed over and saw that there was blood all over his legs and head.

"I couldn't continue watching as it was horrific.

"Although I'm a first-aider, this was the first time I've encountered such a scenario.

"I kept talking to him and didn't allow him to move so that he won't sustain further injuries.

"I called 995 and also directed some oncoming vehicles away.

"The motorcyclist, a 33-year-old man, was conscious when conveyed to Khoo Teck Puat Hospital.