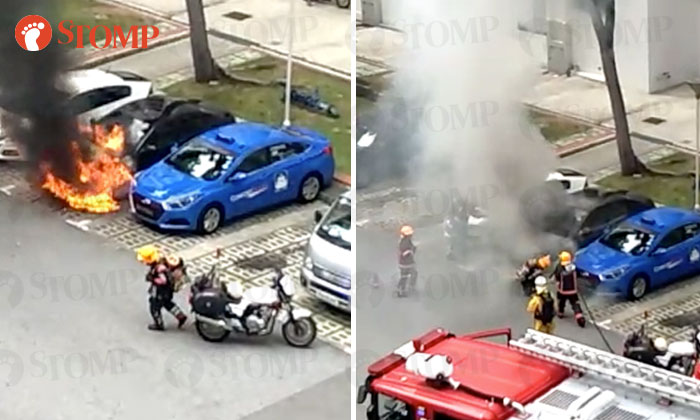 Stomper Douglas received a video of the incident from a WhatsApp group and forwarded it to Stomp.

In the video, the bonnet of a black car was seen engulfed in flames.

The fire became bigger and a loud bang was heard.

Fortunately, a Singapore Civil Defence Force (SCDF) officer was at the scene and managed to contain the fire.

Other officers arrived in a Red Rhino, a fire bike and a fire engine.

Together, the officers extinguished the fire using a water jet and a compressed air foam backpack.

"I think nowadays cars catching fire are becoming more common as compared to the past."

In response to Stomp queries, an SCDF spokesman said:

“There were no injuries reported and the cause of the fire is under investigation.”

(1)   Primary Cause of Vehicle Fire

Most vehicle fires in Singapore occurred while the vehicles were travelling on the road.

The primary cause of these fires is due to ignition sources such as overheating and electrical faults within the engine compartment.

(2)   Equip your vehicle with a fire extinguisher

Most vehicle fires start small but develop rapidly due to the presence of flammables such as petrol, diesel and lubricants.

Hence it is advisable for every vehicle to be equipped with a fire extinguisher so as to enable the driver to extinguish an incipient fire before it spreads.

For a step-by-step guide on how to operate a fire extinguisher, please visit the SCDF website, or download the SCDF application from the Apple and Android App store.

(3)   Measures to minimise injury during a vehicle fire

While travelling, if a vehicle owner were to spot any sign of smoke emitting from his/her vehicle:

If you detect a fire and have a fire extinguisher with you, extinguish the fire and/or call 995 for the SCDF.

To prevent your vehicle from catching fire, you are reminded to:-

·        During each servicing session, ensure that the vehicle’s electrical, engine and fuel systems are checked for any defect.

·        Outside of scheduled servicing period, owners are encouraged to conduct visual checks for any sign of oil leakage.