Taxi on fire in KPE tunnel: Explosion caught on video 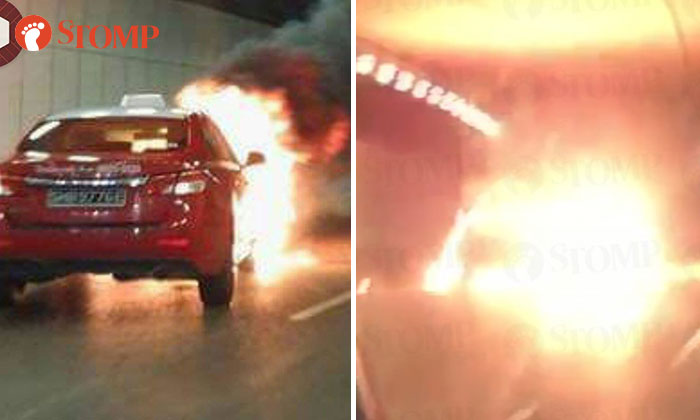 A TransCab taxi exploded into flames along the Kallang-Paya Lebar Expressway (KPE) tunnel today (Aug 29) at around 7pm.

In a video Crystal sent, the bonnet of the stationary taxi can be seen engulfed in flames.

The Stomper, who was in the tunnel when the incident took place, said in a telephone interview that she saw two people walking towards the entrance of the tunnel, while a third lingered near the vehicle.

Another video sent by Edwin shows a ball of fire emerging from the taxi following an explosion.

Other witnesses at the scene said that there were announcements asking drivers to leave their cars and exit the tunnels.

A video sent to The Straits Times shows heavy traffic in the tunnel after the fire broke out.

Said an announcement that can be heard in the background of the video:

"This is an LTA emergency announcement.

"Drive out of the tunnel now via the nearest exit. If unable, turn off your engine and walk to the nearest emergency exit with a bluish-white flashing light."

The Singapore Civil Defence Force said in a Facebook post published at 7.53pm that they have responded to the incident.

"SCDF is attending to a vehicle fire in the KPE tunnel towards TPE before PIE exit.

"The fire has been extinguished.

"There are no reported injuries."